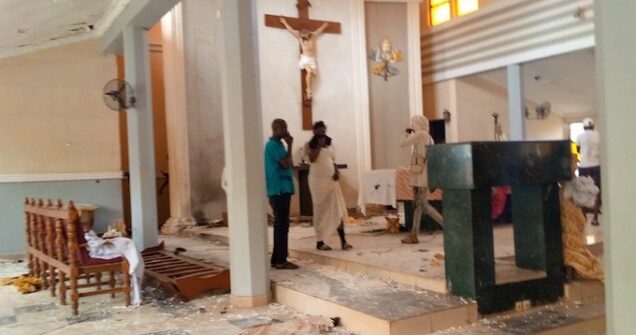 Scene of terrorists attack in Ondo

This is contained in a statement issued on Sunday by the Secretary of the association, Apagun Kole Omololu.

While condemning the attack, the group said it was a direct attack on Yoruba land.

The statement read in part, “The massacre in Owo Catholic Church is a direct attack on Yoruba land.

“It is directed at Governor Rotimi Akeredolu for his unflinching support for security in Yoruba land by championing the Amotekun security outfits, his stringent upholding of the open grazing law, and for his ‘big mouth’ about Southern co-operation for equity and justice in Nigeria.

“We will not succumb to terrorist threats or attacks.

“They will not be allowed to bring down our civilisation. We will hunt the killers down. Citizens should not take law into their own hands by attacking innocent northerners. Only the terrorists, who are mostly foreign Fulani, should be fished out and finished off by the security forces.

“This attack is to cause confusion and cause war in our land. We should not play into their hands. This evil is condemned in the strongest term.

“We commiserate with the government and people of Ondo State, the Catholic Church, the Olowo of Owo, and the people of Owo. May the soul of the departed rest in peace.”