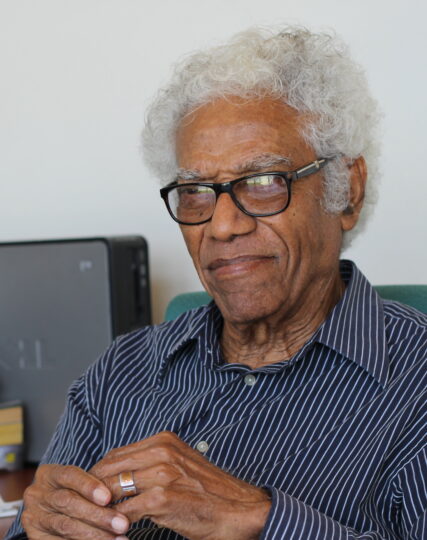 George Lamming, renowned Barbadian novelist, poet, essayist and author of the critically-acclaimed novel, In the Castle of My Skin: dies at 94

George Lamming, renowned Barbadian novelist, poet, essayist and author of the critically-acclaimed novel, In the Castle of My Skin, has died at the age of 94. He passed away in Barbados on Sunday 5 June, four days shy of what would have been his 95th birthday. He was known as the voice of the Caribbean. Wherever he went, he epitomised that voice and spirit that screamed Barbados and Caribbean.

Lamming shot into limelight at 26, when he published his masterpiece, In the Castle of My Skin in 1953. That novel, his debut, not only won a Somerset Maugham Award but also got the attention of literary heavyweights such as Jean Paul Sartre and Richard Wright, who later wrote the introduction to the book’s US edition.

In the Castle of My Skin, widely celebrated as having been the first Caribbean novel to have won worldwide acclaim, features an autobiographical character named G. and can be read as both a coming-of-age story as well as the story of the Caribbean.

Barbadian Prime Minister Mia Amor Mottley, in a statement following Lamming’s passing, said there would be an official funeral for the writer who was so integral to the literature of the region.

“Our internationally recognised and respected novelist, essayist and poet, George Lamming without doubt stood for decades at the apex of our island’s pantheon of writers. Indeed, George Lamming must be considered one of the most famous writers this region has produced. Notwithstanding the fact that he passed away today, four days shy of his 95th birthday, I still declare that he has left us all too soon.”

Mottley, describing Lamming as a man who had given so much to the world, also said she had been making plans to visit Lamming on Wednesday to celebrate his birthday with him.

“Unfortunately, we will now have to switch to a national celebration via an official funeral for a man who has given so much to his country, his people, his region and the world.

“George Lamming was the quintessential Bajan, born in as traditional a district as you can get — Carrington Village, on the outskirts of Bridgetown. And his education was as authentically Bajan as one could possibly acquire — Roebuck Boys’ School and Combermere. But as Bajan as he was, he still distinguished himself as a world scholar: teaching first at a boarding school in Trinidad, before emigrating to England, where he became a broadcaster with the BBC’s Colonial Service.”

Mottley, expressing deep sympathy to the Lamming family on behalf of the government and people of Barbados, said the writer epitomised Barbados and the Caribbean everywhere he went in the world.

“While he has written several novels and received many accolades, none of his works touches the Barbadian psyche like his first, In The Castle of My Skin, written back in 1953, but which today ought still to be required reading for every Caribbean boy and girl.

“Barbados will miss George Lamming — his voice, his pen and, of course, his signature hairstyle — but I pray that the consciousness of who we are that he preached in all that he wrote will never fade from our thoughts,” she said.

Meanwhile, since news of his passing broke, eminent personalities have been paying tributes to him. Professor Richard Drayton said Lamming was part of his life from the earliest childhood.

“After my parents I can’t think of anyone who made a greater impact on me. His contributions to Barbados, the Caribbean, the Caribbean diaspora in Britain, and the world are measureless. He lived and struggled with such grace and generosity. Rest in power George. The ceremony of souls is never at an end.”

Poet Eintou Pearl Springer gave a libation in celebration of his life while speaking at the Jouvayfest Caribbean Heritage Month.

“My friend has just passed. We spent many long hours together. He took me to Cuba, we were together in Grenada through the Grenada Revolution. He mentored me in so many ways. We enjoyed many a good drink together. May I have the love and generosity to mentor others as you have mentored me. I can’t say thanks for all you did for me except by mentoring those who now come to me. As you move from Elder to being an Ancestor, I pay you homage George Lamming, and I thank you.”

In a release on Saturday, journalist Rickey Singh also paid tribute to his ” dear friend and brother.”

“His extensive body of work reflects a deep and personal understanding of the complex historical, cultural and political landscape of the region,” Singh said.

“His was a powerful Caribbean voice – one that is urgently required even now, as Caricom hovers over important decisions to be made on the 2022 Summit of the Americas. He was well known as an outstanding and a fearless voice against external pressures aimed at undermining national and regional unity and political sovereignty. There is no doubt that he would have advised Caribbean governments to absent themselves from this gathering.”

Singh was referring to a call for Caricom countries to boycott the summit to be held June 6-10 in the US where Venezuela, Cuba and Nicaragua may be barred, although the US said it is still working on the final list of invited nations. The Prime Minister has said he will attend.

“George was a man of tremendous courage, singular in his undaunted pursuit of truth and justice. My family must forever be grateful to him when in 1983, he assembled and led students on a peaceful march to protest the revocation of my work permit because of my criticism of the ill-fated Grenada invasion,” said Guyana-born Singh, who lives in Barbados.

“He never shied away, nor was he ever ambivalent when it came to urging the Caricom governments never to waver when the moment arose to be firm in their solidarity on commonly held values, or their right to regional unity and relationship,” he said.

“George commanded respect for his unflinching forthrightness whenever the occasion arose, of speaking truth to power – especially when it came to the preservation and dignity of the call to leadership of the Caricom member states.”

The winner of several awards, Lamming was awarded CARICOM’s highest award, the Order of the Caribbean Community (OCC), in 2008, “honouring fifty-five years of extraordinary engagement with the responsibility of illuminating Caribbean identities, healing the wounds of erasure and fragmentation, envisioning possibilities, transcending inherited limitations. In recognizing this son and ancestor, CARICOM is applauding intellectual energy, constancy of vision, and an unswerving dedication to the ideals of freedom and sovereignty.”