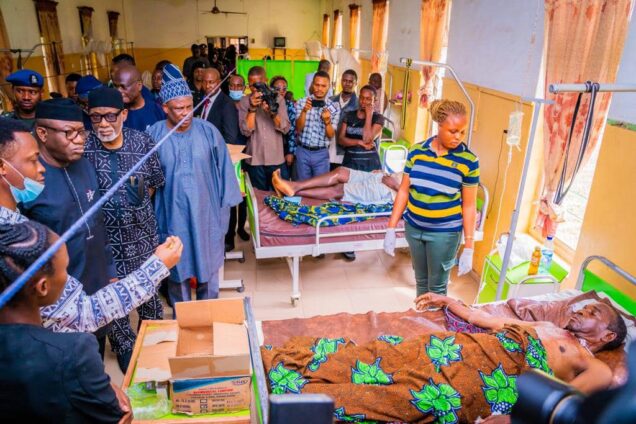 Chairman of the NGF and Ekiti State Governor, Dr. John Kayode Fayemi, made the donation when he paid a visit to Gov. Oluwarotimi Akeredolu at the Government House on Monday in Akure.

They were later led by Akeredolu to the residence of the Bishop of the Catholic Diocese of Ondo, Bishop Jude Arogundade, before moving to Owo to commiserate with the Olowo of Owo, Oba Gbadegesin Ogunoye in his palace.

Fayemi, who described the attack as least expected, stated that Owo had been a very peaceful environment.

“It is a serious and unusual attack on the people who can’t go out and farm or worship God in peace. We are all shocked.

“Just like the governor said, these people shall not go unpunished. They will be hunted down and brought to book. But this cannot save the lives that have been lost or save the wounded from discomfort.

“As leaders of the people, we will redouble our efforts. This is happening across the county and we are concerned. We know how troubled you will be. And we know that this is something that troubles our minds.

“For now, the governments at the state and federal levels are working to bring the perpetrators to book.

“My colleagues in the Governors Forum have asked me to donate N50 million to the Catholic Church to ameliorate the condition of the families of the victims. This is a crime against humanity.” Fayemi said.

The Bishop of Ondo Diocese, Bishop Jude Arogundade described the attack as evil.

He urged the governors to ensure that those behind the killing and their sponsors were brought to book.

“I appreciate your coming and comment. How did we get here? Have we lost our minds and humanity? Even in a war situation, nobody kills children and women. Nobody attacks the church.

“I am calling on you the leaders of the country, I think we need to talk and we need to be frank with ourselves.

“This cannot happen without the backing of some powerful people. Those behind this no matter how powerful they are must be brought to book.

At the palace of Oba Gbadegesin Ogunoye, the Olowo of Owo, Fayemi commiserated with the people of Owo and the Olowo over the ugly incident.

“Our people are traumatized. The entire governors asked me to deliver their condolences to you and the entire Owo people. We are all still in shock.

“This is not an attack on Owo or Ondo state. It is now an attack on all of us. We must restore our pride so that our people can feel safe again. We need to restore our country to sanity, to safety.” he said.

Oba Ogunoye said that the perpetrators of the ugly attack wanted to make a statement.

He urged the federal government to be proactive, saying “Our forests here in Owo, in Yoruba land, have been invaded.

“Our farmers can’t go to their farms again. Those in our forest illegally must be flushed out.”

Akeredolu later led the visitors to the St Louis hospital in Owo, where some of the survivors are receiving medical attention.