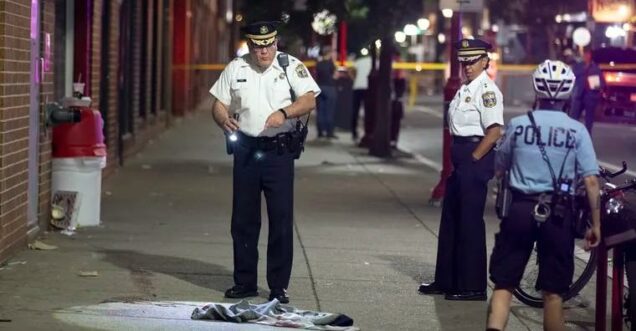 Police in Pennsylvania after the shooting

Mass shootings in Pennsylvania and Tennessee killed at least six people and wounded more than 25, police said on Sunday in the latest cases of U.S. gun violence after recent massacres in Texas, New York and Oklahoma.

Two men and a woman were killed, officials said, with two of the dead and most if not all of the wounded being innocent bystanders.

Surveillance video showed people on a crowded street running in panic in the closing moments of the 22-second clip, presumably after gunshots were fired.

Likewise in Chattanooga, Tennessee, shooting broke out as people were otherwise enjoying a Saturday night on the town, though the violence erupted after midnight.

No suspects were in custody in either shooting.

In yet another shooting in the early hours of Sunday, three people were killed in Saginaw, Michigan, Mlive.com reported, citing Saginaw police.

In the Chattanooga shooting, three people were dead and 14 suffered gunshot wounds, authorities said, adding that two people died from gunshot wounds and one person died from injuries after being struck by a vehicle while fleeing the scene.

Three victims were injured as they attempted to flee and were struck by vehicles, Tennessee officials said, adding several among the injured remained in critical condition.

The incidents followed recent shootings that killed 10 people at a grocery store in Buffalo, New York; 21 victims at an elementary school in Uvalde, Texas; and four people at a medical building in Tulsa, Oklahoma. Gun safety advocates are pushing the U.S. government to take stronger measures to curb gun violence. read more

There have been at least 240 mass shootings in the United States so far this year, according to the Gun Violence Archive, a nonprofit research group. It defines a mass shooting as one in which at least four people are shot, excluding the shooter.