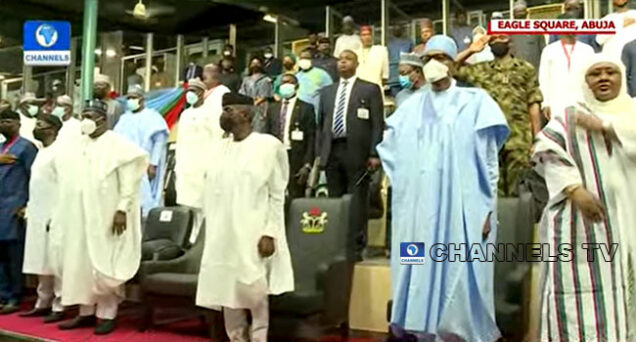 Buhari and his wife, Aisha, with Osinbajo at the venue of APC Special Convention

Vice President Yemi Osinbajo left Eagles Square the venue of the presidential primary of the ruling All Progressives Congress, APC early Wednesday morning as it became increasingly clear that his dream of succeeding his boss as Nigeria’s next president may have come to naught.

Osinbajo was rated alongside former Lagos governor Asiwaju Bola Ahmed Tinubu as the front runner among the 23 contenders for the 2023 presidential ticket of APC.

But events at Eagles Square suggested that he may not stand a chance against the man who first brought him to limelight by appointing him as Attorney General and Commissioner of Justice in Lagos.

Tinubu also nominated him as the Vice President to President Muhammadu Buhari following the victory of APC in 2015.

Indeed, Osinbajo was booed as a betrayer for contesting against his former boss and benefactor on arrival at the Eagle Square on Tuesday evening.

Things gets worse for Osinbajo when his former boss was endorsed by two former governors, a sitting governor, a former Speaker and the youngest among the 23 aspirants.