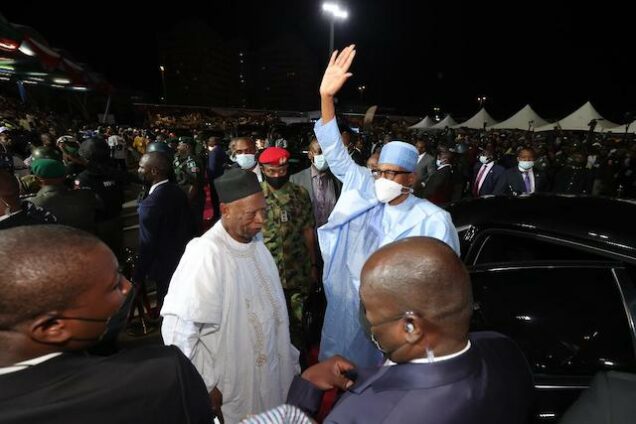 Buhari acknowledges cheers on arrival at the convention venue in Abuja

President Muhammadu Buhari departed the Abuja venue of the All Progressives Congress presidential convention early Wednesday, minutes after he delivered his address.

He left with his wife, Aisha at about 1.30 a.m and was seen off by top officials, including Vice-president Yemi Osinbajo, one of the contestants in the primary.

In his speech, Buhari urged members of his party to remain united and avoid acrimony.

He rallied delegates at the special convention to consider voting the presidential candidate with the best chances of securing victory in the 2023 general elections.

In his address at the Eagle Square, venue of the special convention, the President said the critical task ahead of the Abdullahi Adamu-led National Working Committee (NWC) ”remains to continue to forge the unity of purpose among party members and to keep securing needed compromises in the interest of the party.”

The President, who spoke to the delegates before the voting exercise to elect the presidential candidate, urged party officials and delegates to follow due process and abide by all extant laws and regulations pertaining to election of the party flag bearer.

The Nigerian leader said the flag bearer must be knowledgeable, fair-minded nationalist with a very strong belief in the unity of the country and strength of character and purpose to steer the country forward.

”My fellow party members and compatriots, I commend you for your various roles and contributions towards the successful conduct of the various APC primaries across the nation. I commend the party stakeholders, officials, organs and the Abdullahi Adamu-led NWC.

”I commend your efforts in organising party exercises and urge you not to rest on our achievements so far. Now we have a big task ahead: the special convention for the presidential primary.

”I congratulate all the winners, our newly emerged party flag bearers, so far, for the 2023 general elections and urge you to be magnanimous in victory, particularly towards your fellow aspirants who conceded to you. I urge you at all times to abide by the Party rules and follow party reconciliation processes.

”In every competitive event, there are bound to be winners and runners-up; and as such, all the aspirants who lost or conceded at the primaries, I equally urge you to maintain the spirit of sportsmanship and to stand by our great party for the next challenges ahead.

”As we go into the presidential primary, I urge all to keep to the same spirit. We must avoid acrimony and maintain the spirit of sportsmanship. The critical task ahead of the Abdullahi Adamu-led NWC remains to continue to forge the unity of purpose among party members and to keep securing needed compromises in the interest of our great party.

”I enjoin you all to be fair to all and to create a level playing field for all the presidential aspirants in the coming crucial party exercise.

”Please, follow due process in all the party decisions and I call on all party members, particularly the party officials and delegates to abide by all extant laws, rules, and regulations and to consider voting for the presidential candidate with the best chances of securing victory for our great party in the coming general elections,” he said.

Underscoring that the principal challenge before the party is the need to keep a united front, the President affirmed that the National Executive Committee (NEC) of the party has vested its powers in NWC for the time being, as requested, and in compliance with the Party Constitution, to ensure smooth party administration and operations in these critical times in the overall interest of the party.

President Buhari, therefore, assured the party Chairman and the entire NWC members of his support, adding:

”Please do not hesitate to call on me and all other appropriate quarters for the help that will propel our great party to the victory that we all seek. To ensure a hitch-free presidential primary, please let us work collectively in the interest of our great party and our great country.”

On governance issues and how his administration has steered the ship of state in the last seven years, the President declared that the APC Government in spite of inheriting a nearly dead economy, has made substantial progress in implementing reforms, providing infrastructure and social care and redeeming Nigeria’s image in the international community.

”Fellow delegates, fellow men, women, youth, citizens of our country. Many people have short memories. But let us remember the situation we inherited.

”A nearly dead economy in spite of oil being over $100 per barrel for many years. Vast areas of our country under insurgent control. Salaries, wages, pensions unpaid for months in many states.

”Problems were left unattended or ignored. Infrastructure left to decay. Internationally we were despised.

”Your APC Government has changed all that. Our response to any new challenges, whether banditry, kidnappings, insurgency has been prompt and head-on. Rehabilitation of infrastructure has taken place on a massive scale. Our response to Covid-19 is second to none in Africa.

”We have made substantial progress in governance, in implementing reforms, in democratic processes and in social care.

”We are now respected in Africa and across the world. These major achievements by APC are historic and far-reaching.

”We now have to choose a leadership not just to win elections next year but to continue and improve on these landmarks.

”We must choose a knowledgeable, fair minded nationalist with a very strong belief in the unity of our Nation, Nigeria, and strength of character and purpose to steer the country forward. We should not allow the PDP to drag the country backwards, ” he said.