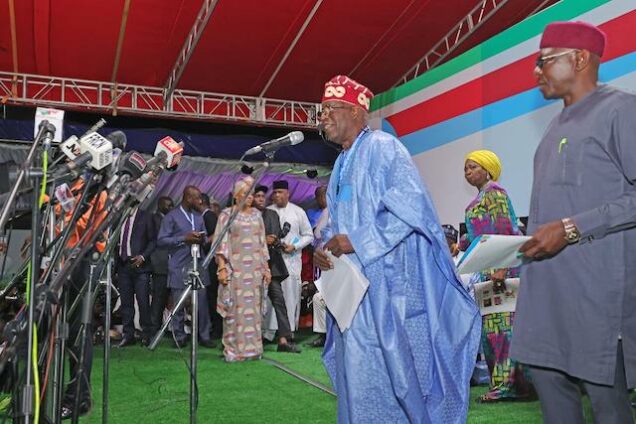 Asiwaju Bola Ahmed Tinubu is projected to win the presidential primary of the All Progressives Congress, following the declaration of support for his candidacy by two governors Kayode Fayemi and Badaru Abubakar and five other aspirants.

The big boost for Tinubu’s candidacy must have disappointed Vice-President Yemi Osinbajo, who had high hopes of President Buhari’s anointment.

But the anointment didn’t materialise.

Just before 7.am Wednesday morning, Osinbajo left the venue, about five hours after President Buhari and his wife also left.

Osinbajo left while voting was yet to be completed at the Eagle Square, the venue of the convention.

Both Badaru and Fayemi were presidential aspirants and their withdrawal from the race on Tuesday night gave Tinubu all the delegates from Jigawa and Ekiti.

It also altered largely in Tinubu’s favour voting preference in Ondo, where Fayemi was projected to have been able to snatch votes from Tinubu, were Fayemi still running.

Tinubu was already ahead of the other candidates in the run up to the convention, with delegate support from the Northwest, North east, North central and South West.

Senator Godswill Akpabio pulled out of the race for Tinubu at 10:06pm.

Akpabio’s action gave Tinubu an immediate firm footing with delegates from Akwa Ibom state, where Akpabio is the leader.

It was after Akpabio stepped down that former governor of Ogun State, Ibikunle Amosun also announced his withdrawal.

In all, seven aspirants, who picked the party’s tickets for N100 million each, stepped down for the former Lagos State governor.

In contrast, Osinbajo also harvested some aspirants, such as 40-year-old Felix Nicholas, the youngest in the race.

But they were mainly political paperweights.

Earlier on his arrival at the convention, Osinbajo was booed by delegates from the South West, who were supporters of Tinubu.

The incident happened when the vice president walked toward the delegates’ area to greet them upon his arrival at the venue.

The development forced Osinbajo to change his route to the VIP area, where he was waved at by some senior party officials and other stakeholders.

In contrast, Tinubu arrived the venue with thunderous shouts of ‘Jagaban’ renting the air for more than 10 minutes.

Crowds swarmed the bus that brought him and it took a titanic task to clear the path for him to join other aspirants at the VIP area.

Senate President Ahmad Lawan came in shortly after Tinubu but his arrival was overshadowed by the rousing ovation, singing and dancing by the supporters of the former Lagos governor.

All the aspirants were given two minutes to address the delegates before voting commenced.

Some 2,203 delegates are expected to vote at the convention. Counting of votes will commence immediately.