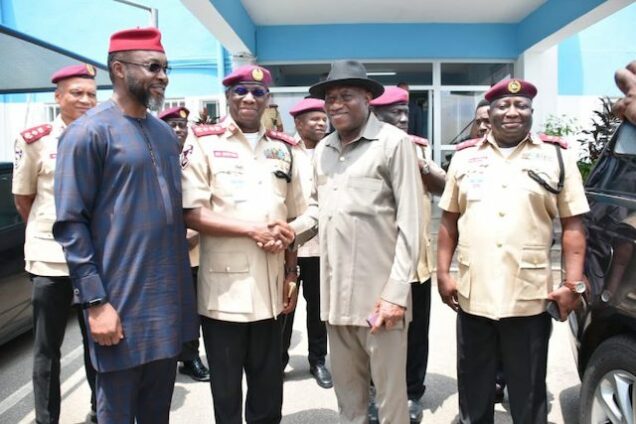 Former President Goodluck Jonathan has expressed satisfaction with the services of the Federal Road Safety Corps (FRSC) as his driving licence was renewed by the agency.

The former President stated this on Thursday at the national headquarters of the Corps when he visited to renew his expired National Driver’s licence in Abuja.

A statement by the Corps Public Education Officer (CPEO), Mr Bisi Kazeem in Abuja, reported the ex-president as stating that the agency is functioning optimally.

Jonathan said that the Corps is very focused and highly effective in the deployment of technology at the work place.

He said that he was impressed with the services offered in the driver’s licence capture centre, adding that the service was prompt.

“I am impressed with what I have seen and I am happy that this agency is functioning optimally, very focused and highly effective.

“I am always proud of the deployment of technology and I believe the Corps has key role to play in arresting the security situation in the country, ” he said.

Jonathan said there were no more short cuts in the processes for the acquisition of the National Driver’s Licence.

He added that it could not be done by proxy any longer due to the effective deployment of technology in the entire process.

Jonathan was received by the Corps Marshal, Dr Boboye Oyeyemi.

Oyeyemi led him on a tour of some of the critical operations, information and communication technology facilities domiciled at the headquarters of the Corps.

Part of the facilities visited included the Emergency call centre (122), the Monitoring and control room, and other vital national infrastructure domiciled at the headquarters of the Commission