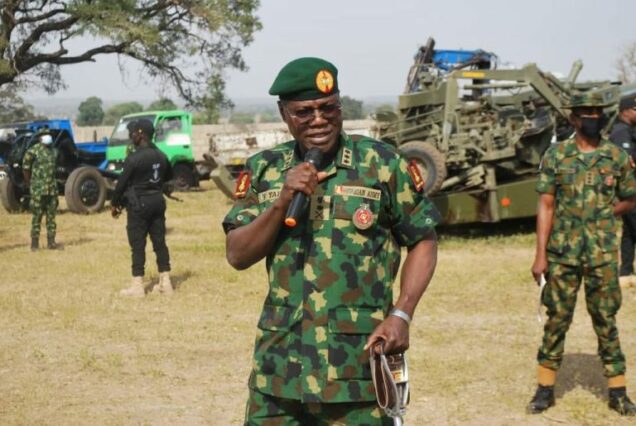 The Chief of Army Staff (COAS), Lt.-Gen Faruk Yahaya, has said the 5,800 recruited soldiers would be posted at various theatre operations to tame persistent insecurity bedeviling some parts of the country.

The COAS said this during the Passing-out-Parade (PoP) of the 82 Regular Recruit Intake on Saturday in Zaria, Kaduna State.

Yahaya, who was the Special Guest of Honour and Reviewing Officer of the PoP, said the exercise aimed to strengthen the Nigeria Army would translate into more food on groumd.

He said the new soldiers would be posted to more relevant areas where they are required, warning that “it is a clear message to all criminals, whether they are bandits, kidnappers or terrorists”.

He, therefore, urged the new soldiers to maintain a high standard of professionalism and remain good ambassadors of Depot Nigerian Army and the Armed Forces of Nigeria.

“As for the passing out recruits, you are all aware, Nigeria is currently facing numerous security challenges such as the activities of Boko Haram Terrorists, armed bandits, kidnappers, secessionist agitators and other criminal elements.

“I wish to state that these security challenges can only be surmounted by the collective resolve and effort of every officer and soldier of the Nigerian Army, including those of you passing out today,’’ he said.

Yahaya, therefore, enjoined the new soldiers to apply the mental, physical and moral training acquired over the past few months as well as those “you will be exposed to at your respective units, formations and corps”.

He added that the army expected them to uphold the Nigerian Army Core Values of Loyalty, Selfless Service, Courage, Discipline, Integrity and Respect for Others, which are sacred to all personnel.

“These values along with other cherished ethos of the Nigerian Army, if well imbibed and upheld, will help you attain great heights in your chosen career,” Yahaya said.

The army chief also advised the soldiers on the importance of the Oath of Attestation they have sworn to.

He said: “By this oath you are under obligation to remain loyal to constituted authorities at all times and place the interest of the nation ahead of your personal convictions’’.

He noted that Depot Nigerian Army, since its establishment in 1924, has borne the responsibility of moulding selected able bodied citizens into well trained and disciplined soldiers to meet the manpower demands of the Nigerian Army.

He added the function of moulding selected able bodied citizens into well trained and disciplined soldiers was of utmost importance and remained relevant, considering the numerous security challenges presently bedeviling our great nation.

Yahaya said he was glad to report that Depot Nigerian Army has continued to plan and conduct its training activities in compliance with the Army Headquarters Training Directives.

He said the training was also in cognisance of his vision of having a “professional Nigerian Army ready to accomplish assigned missions within a joint environment in defence of Nigeria”.

The News Agency of Nigeria (NAN) reports that the COAS also inaugurated and inspected numerous projects at the Depot NA and Army School of Military Police, Basawa, Zaria.