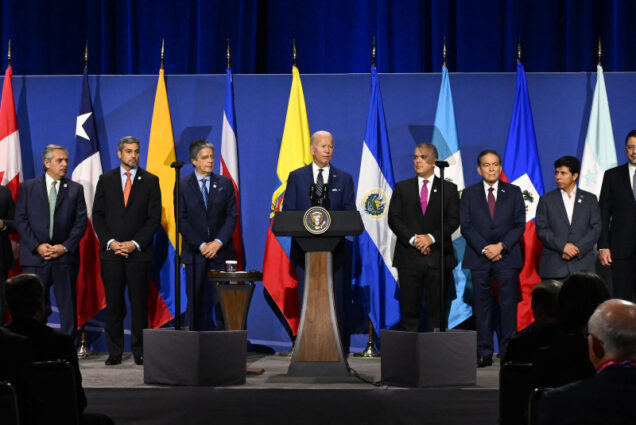 U.S. President Joe Biden and 19 Latin American and Caribbean leaders on Friday signed a much-anticipated pact to expand legal pathways for migrants and refugees and provide new funding to assist countries in hosting them.

“Each of us is signing up to commitments that recognize the challenges we all share, and the responsibility that impacts on all of our nations,” Biden said as he joined a group of regional leaders to sign the so-called Los Angeles Declaration.

The signatories to the agreement announced on the last day of the Summit of the Americas in Los Angeles, included Mexico, El Salvador, Guatemala and Honduras — four countries whose commitments were in doubt after their leaders boycotted the conference over the U.S. decision to exclude several countries it considers to be anti-democratic.

Mexico is a key player in the region, and its cooperation is essential to stemming the flow of migrants to the U.S., while the three Northern Triangle nations of Central America — El Salvador, Guatemala and Honduras — produce a large share of the region’s migrants.

Although their leaders’ absence had cast doubt on how comprehensive migration talks at the summit would be, Biden administration officials maintained that the pact would include a diverse group of countries coping with the surge in migrants across Latin America.

Migration patterns in the Western Hemisphere have shifted as the region has grappled with a pandemic-fueled economic crisis, exacerbated by political upheaval, violence and environmental disasters.

Biden pointed out that millions of migrants who fled Venezuela now make up as much as 10 per cent of Costa Rica’s population.

“(Our) economic futures depend on one another…. And our security is linked in ways that I don’t think most people in my country fully understand — and maybe not in your countries as well,” he said.

The pact includes commitments from Mexico to launch a temporary labor program for 15,000 to 20,000 workers from Guatemala.

The country will expand eligibility for that program to include Honduras and El Salvador “in the medium term,” according to a fact sheet provided by the White House.

The Biden administration plans to dole out $314 million in humanitarian aid, funded by the U.S. Agency for International Development and the State Department, as well as provide billions in existing development bank funding to help promote new programs to accept migrants and refugees in countries such as Ecuador and Costa Rica.

“If you prey on desperate and vulnerable migrants for profit, we are coming for you. We are coming after you,” he warned.

Other countries will also be taking steps to address the jump in the number of migrants traveling to the United States.

Border officials encountered more than 1.7 million migrants along the U.S. southern border in 2021 and more than 1.3 million in the first seven months of this year, according to U.S. Customs and Border Protection.

Canada, too, will provide $26.9 million for the 2022-23 fiscal year for migration management and humanitarian aid. Spain will pledge to double the number of labor pathways for Hondurans.