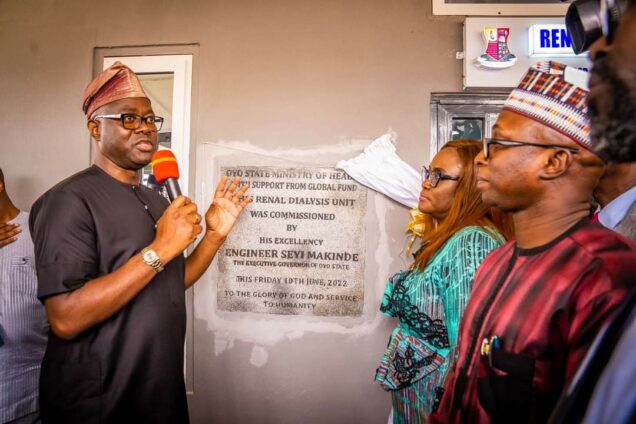 Makinde reiterated his administration’s commitment to ensuring that residents have adequate access to health care delivery.

The projects were built and equipped with the support of three groups.

The groups are the Lions Clubs International, District 404 B1, Nigeria, Global Fund and the Afolabi Family of Kaderu Compound, Ibadan.

The Global Fund supported the state government to put the Renal Dialysis Centre together while the Diabetes Screening and Treatment Centre was constructed by the Lions Club, District 404 B1.

The funding for the High Dependency Unit majorly came from the Afolabi family, Oyo State Government and also the Global Fund.

The governor thanked the donors for the support given to the state to improve health care delivery.

Makinde also inspected six Primary Health Care Centres (PHCs) out of the about 200 already renovated across the 351 electoral wards of the state.

The PHCs inspected were the ones at Ikumapayi in Olodo area, Irefin; Oke Are in Beere; Odo-Ona, Elebu and Ring Road, all in Ibadan.

According to the governor, the renovation and remodelling projects are aimed at improving healthcare system at the grassroots.

He also hinted that the facilities would be run by the Oyo State Health Insurance Scheme (OYSHIA) when completed.

Makinde pledged that he would personally pay for 1,000 enrollees of the scheme at the Ikumapayi PHC in Olodo and 500 enrollees at the Elebu PHC in Ido, Ibadan.

He said that the government would inaugurate the facilities when they are equipped and staffed.