Umahi: All Ebonyi votes for Tinubu, APC not LP 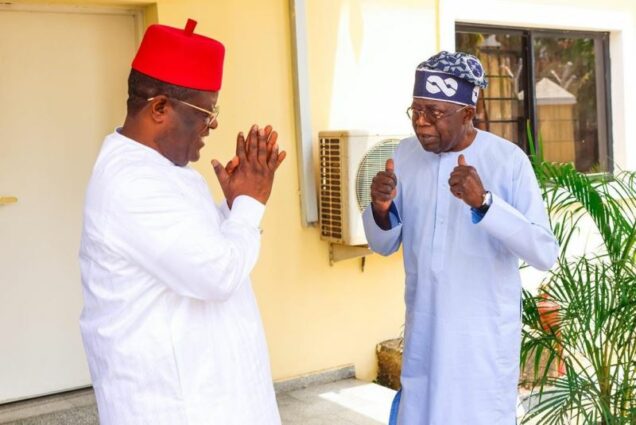 Tinubu and Umahi during the visit

Governor David Umahi has said the people of Ebonyi state would massively vote for the All Progressives Congress (APC) and not Labour or any other party.

He stated this on Monday after swearing-in five new commissioners.

His statement was a reaction to the growing popularity of the Labour Party and its Presidential Candidate, Mr Peter Obi in the South-East zone.

According to the governor, the ruling party APC was instrumental to the infrastructural and economic development of the state and the people would identify with it at all times.

“Let the states which the Labour or any other party helped vote for it, as Ebonyi has been liberated and risen.

“The APC presidential candidate, Bola Tinubu, started with one state and used it to liberate his people.

“We should do the same in Ebonyi and make people negotiate with us with our massive number of votes,” he said.

Meanwhile, he noted that he has decided on his consensus candidates for the forthcoming local government area elections in the state and urged that his wish be respected.