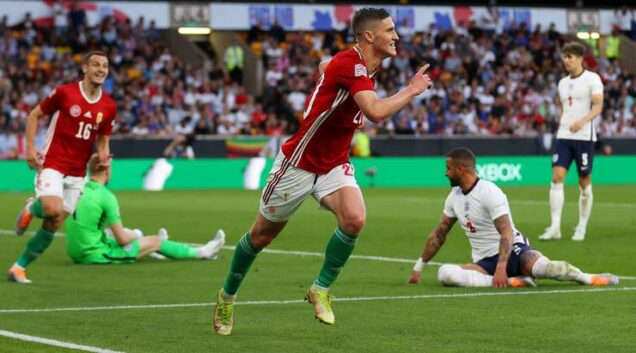 Disastrous Three Lions of England have suffered their biggest defeat at home in 94 years after they crumbled to 0-4 defeat to Hungary in European Nations League on Tuesday.

The last time England recorded their biggest defeat at home was in 1928 when they lost 5-1 to Scotland.

The match was played at the Molineux Stadium, Wolverhampton. It was a sad day for the English national team.

A high flying Hungary opened scoring on 16 minutes. After a goalmouth scramble, the ball rebounded out to Roland Sallai who buried it from close range into the left side of the goal.

The visitors doubled their lead on 70 minutes. Martin Adam provided Sallai with a nice pass inside the box. It allowed him to finish with a strike into the middle of the goal.

It was 0-3 for Hungary on 80 minutes after Zsolt Nagy received a great pass from his teammate and struck a very powerful shot towards goal that went inside of the right post.

John Stones was awarded a yellow card and sent off by Clement Turpin on 82 minutes. It was his second card of the evening.

England’s woes continued as the hungry Hungarians added a fourth goal one minute to duration time.

Adam Nagy got to the ball, slipped Daniel Gazdag into the area and scored with a delightful chipped finish.

With the defeat, England remain bottom of their group which also include Italy and Germany.