Femi Adesina under fire for attacking Oyedepo over comment on Buhari 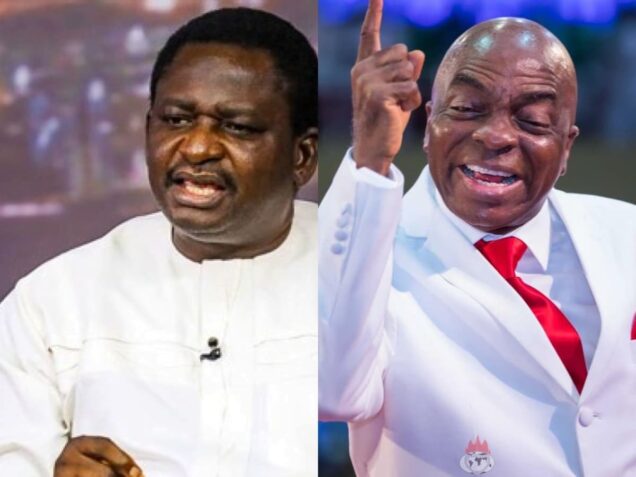 Special Adviser to the President on Media and Publicity, Femi Adesina is under fire for attacking Bishop David Oyedepo over his comment that President Muhammadu Buhari’s government is the most corrupt in Nigeria’s history.

Oyedepo, Presiding Bishop, Living Faith Church Worldwide, had on Monday said the Buhari’s government is the most corrupt in Nigeria’s history.

“What a fight against corruption? You were all deceived. You can’t be in corruption and fight corruption. The most corrupt regime in the history of Nigeria.

“You heard of the Auditor General. N80 billion, all they need to get the universities up and running is less than N80 billion.

“Are they interested? Their children are not there. God has risen, and the land shall be liberated. The nation shall be rescued in the name of Jesus,” he said.

However, Adesina, in a tweet on Tuesday said “The bishop at Ota can’t even get his facts right. Blinded by hatred for PMB, he says Auditor General stole N80bn.

“Pity! He doesn’t know difference between Accountant General (only alleged) and Auditor General. Like OBJ said long ago, we should begin to ordain our own bishops.”

Reacting to Adesina’s attack on Oyedepo on Twitter, Nigerians hit back at him, justifying Oyedepo’s position that Buhari’s government is corrupt.

According to Ogunleye ES, “Femi Adesina should explain to Nigerians if PMB is not the most exponential corrupt govt. in the History of Nigeria. 1. How did they spend money borrowed from China that plugs Nigeria to huge debt runs to billions of Naira?”

Top Ambassador wrote: “Uncle Femi Adesina. Aside from the mix up, I don’t get your point. You are still in government sir. What a pity, absolute power corrupt!”

A Twitter user by the name, Resource Planner added: “Femi Adesina and Lie Muhammed are reasons Nigeria is messed up. They have zero tolerance and shocks for accepting criticism. Like a wimpy child, they’r so emotionally feeble to confront truths. Nigerians are misinformed cos they couldn’t discharge their duties professionally.”

Maisarauta IV said “Femi Adesina is the type of person Fela meant in his “Zombie” song.”

Jumoby wrote: “Femi Adesina is another prime example that we indeed become who we surround ourselves with. Stolen money is not the problem to this man. It’s the wrongly named person. Another height of folly. Keep breaking records like your master PMB.”

DaZillionaire added: “Femi Adesina @FemAdesina “Touch not my anointed and do my prophets no harm” The God of Elijah will shall rise against you in Jesus name amen.”

A Twitter user, President Eniola Daniel, said “Uncle Femi Adesina @FemAdesina was a very SANE and SOUND man as the Editor of The Sun Nigeria, so, what could have gone wrong after accepting to work with Gen. Muhammadu Buhari? Calling Bishop Oyedepo blind is extreme and a confirmation that all is not well with him?”

Zukky_D_Great added: “I have finally discovered why some people in Government never criticize the Government, no matter how bad it is. This is because they have table manners like Femi Adesina & Garba Shehu “You don’t talk while eating.”

Rev. Manny Akpan wrote: “I respect Femi Adesina; he is a genius. Defending the Buhari government is not an easy thing to do. How does he do it? The level of insecurity, corruption and nepotism in the last 7 years needs a genius to attempt to pull the wool over the eyes of Nigerians. Great job Bro. Femi.”