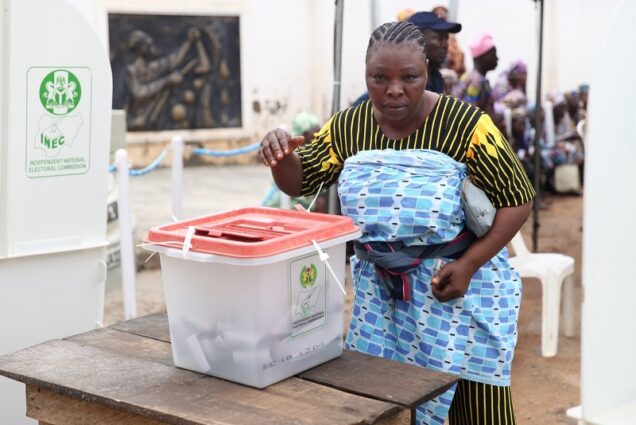 A woman casting her ballot in the ongoing Ekiti governorship election

Hundreds of residents of Ekiti State turned up early on Saturday, in demonstration of their eagerness to elect a new Governor.

Prospective voters have assembled at polling units in Ado Ekiti the state capital, as early as 7 am checking their names on the voters lists, in anticipation to cast their ballot.

When our Correspondents visited Ward 08, Unit 11, Ereguru, GRA, huge crowds were already set for the election.

Voters in Ikere Ekiti, the second largest town in the state and headquarters of Ekiti South senatorial district, also recorded large turn out of voters.

INEC adhoc officials at Ward 10, Units 07 and 08, inside Comprehensive Health Centre, Afao/Kajola, Okere Ekiti, were already reeling out voting instructions to the voters when our news crew visited.

An agent of the All Progressives Congress (APC) in Ward 11, Unit 01, Odose, Ikere Ekiti, Animasaun Said, expressed satisfaction with the process.

“I am very satisfied with the prices so far, and I hope it goes this way tot the end,” he said.

The same was the story at Ward 7, Unit 02, and Ward 01, Unit 01, Atiba Aafin, located in front of the palace of the Ogaga of Ikere Ekiti, where voting was already ongoing.

Adebayo Ojo, an agent of the PDP, also expressed satisfaction with the process, describing it as very peaceful.

Ojo added that the BVSA accreditation process was hitch-free and fast.

There was however hiccups at Ward 04, Unit 02, where BVAS was said to have failed.

One of the voters, Prof. Aye Matthew, said it is absurd to prepare for election without provision for stamp.

He said: “There is a lot of delay here. Ordinary stamp is delaying us from starting to vote.

“We were waiting for the stamp and we will wait until the stamp comes. We have been here since 8:30 am.

“The BVAS is not functioning well. It is not capturing everybody,” he added.