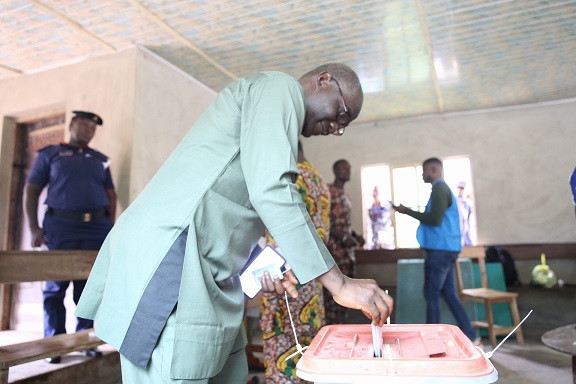 Speaking to journalists at Ward 2,Unit 7, Okeruku, Ikere Ekiti, Eleka who cast his ballot at about 10.45 am, noted that the entire process was orderly, peaceful and secured.

“For me, the whole process is very fair, is transparent and it’s orderly. The people are conducting themselves orderly, there is no rush, everything is peaceful,” he said.

The former Deputy Governor who also commended the conduct of the electorate, added that the outcome of the election will reflect the wish of the people.

According to him, “I’ve voted for my party, whatever the outcome is the wish of the people.

“I think there was a place where they complained of rubber stamp and the people insisted that stamp mus be provided before they will continue with the process.

“The process itself is quite fair and I think it will make the process count.

“Usually, you will expect the people to wait behind to defend their votes. Even if you don’t tell them to wait, they will want to wait so that the votes are counted correctly,” he added.