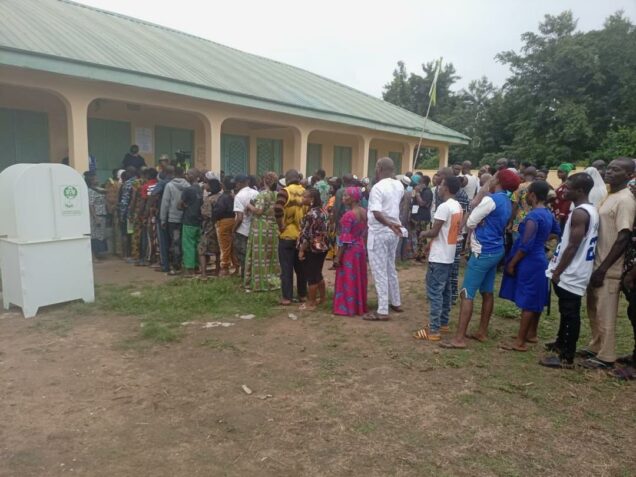 Unprecedented numbers of enthusiastic voters on Saturday thronged various polling units in different towns, villages and hamlets in Ekiti to perform their civic rights in the ongoing governorship election.

Also, there were combined security personnel on the ground to protect the lives and property in different parts of the state and as well their presence was noticed at both far and near the polling centres.

At the Ekiti office of the Independent National Electoral Commission (INEC), there was heavy presence of security agents to forestall any eventuality.

The News Agency of Nigeria (NAN), while on monitoring of the polling units, report that security agents arrived many polling units as early as 7.20 a.m.

At some of the border towns linking Ekiti with other states, military men were strategically stationed with officers and men, keeping vigil and conducting search on vehicle owners and occupants.

The restriction placed on human and vehicular movement during election was strictly obeyed by residents and travellers alike, as most inter-township roads were empty.

This development compelled many voters to trek long distances to their polling units, as there were no taxi or commercial motorcycle operators to convey them.

Besides, all markets, shops and eateries were under lock and key.

Other areas were Ise-Ekiti, the home town of former Minister of State for Works, Dayo Adeyeye, Emure-Ekiti, Ido-Ekiti and Omuo-Ekiti, hometown of Sen. Biodun Olujimi of the PDP and Rep. Femi Bamisile of the APC.

In many of the places visited, scores of voters were seen already on queues, waiting for the attention of the electoral officers.

Those sighted among the crowd of the enthusiastic voters, include students and artisans of between 18 and 20 years bracket, old people and a handful of expectant mothers.

It was observed that in most of the places, officials including ad hoc staff, deployed by INEC arrived only few minutes after 8.00 a.m, while some of them have no chairs to sit on.

NAN reports that 16 candidates from different political parties are slugging it out in today’s Ekiti election, with only a female candidate, Mrs Kemi Elebute-Halle of ADP.

According to statistics at the disposal of NAN, over 17,000 policemen were deployed for the Ekiti election, with NSCDC deploying 9,747, while the army and others also deployed appreciable figures.

When contacted, Mrs Morolake Odebunmi, the Public Relations Officer of INEC, told NAN that there was nothing much to do at the INEC office this morning.