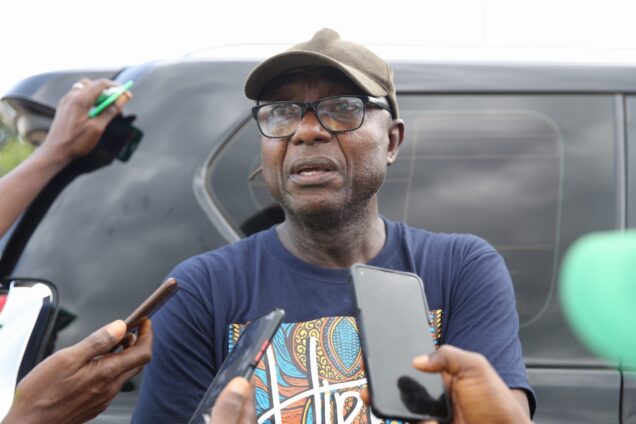 Speaker of Ekiti House of Assembly, Afuye addressing journalists at the polling unit

There was pandemonium at Ward 10, Unit 9, Ilupeju, Ikere Ekiti, on Saturday, when security operatives allegedly snatched money meant for vote-buying by one of the participating political parties in the ongoing governorship election in Ekiti State.

The situation almost resulted in a stampede, as the scores of angry electorate allegedly engaged the security operatives, to retrieve the money.

One of the eyewitnesses of the incident who spoke to our Correspondents at polling unit, said the security operatives overpowered the voters and succeeded in carting away the money.

The source who asked not to be named in print, identified the security operatives as men of the Nigerian Security and Safety Defense Corps (NSCDC).

“The money was supposed to be used to settle the voters, but the NSCDC men just went there and snatched the bag of money from them.

“Some of the people have voted and have not collected their money before they came to snatch the bag of money from us.

“Some of us challenged them and tried to collect the money back from them, but they overpowered us and ran away with the money,” the source added.

A party agent at the polling unit, who alleged that the Speaker of Ekiti State House of Assembly, Rt. Hon. Funminiyi Afuye, was invited to resolve the issue, queried the presence of the lawmaker with his security operatives at the unit.

Hon. Afuye, who denied knowledge of the snatching of money meant for buying votes, described whatever might have happened as “stampede”.

He said: “I’ve voted in my unit and I was just going round to see if there is one problem or the other, but there is no crisis, no violence. People can just stampede because they want to vote, instead of them to line up and spend less time, but they will crowd at a place, you know that is part of our culture. But, bye and large, the people have been conducting themselves well.”

When confronted over the allegation of the snatched money, Afuye said they did not snatch his party’s money.

“I am not aware of that, I wasn’t here then, and, if they are snatching money, they are not snatching from my party. There’s been no violence that has been reported to me,” he said.

The Speaker however justified the presence of his security operatives at the polling unit.

“You want me to go about without my security agents? Are they harassing people? They are not. They are on their duty, just as you are on your duty as journalists.

“By virtue of my position as the chief lawmaker of the state, the moment I don’t go and tampered with whatever they are doing, I’m observing.

“The only time I went there is when they said they wanted to confirm the number of the machine, that’s all.

Spokesman for Ekiti NSCDC, Afolabi Tolulope, said he was not aware of such incident, adding that he was not yet at the office to know if any NSCDC officials on patrol made report about money at voting centres.