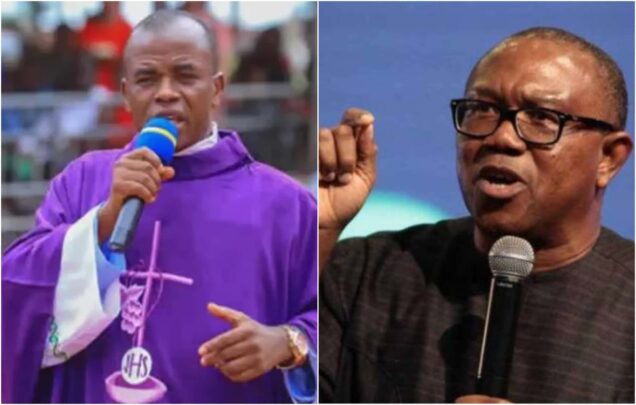 The Catholic Bishop of Enugu Diocese, Bishop Calistus Onaga has banned Catholics including the clergy from attending Rev. Fr. Ejike Mbaka’s Adoration Ministry over his recent utterances in the ministry.

This is contained in a letter personally signed by the Bishop of Enugu Diocese, Bishop Callistus Onaga and addressed to ‘All the Clery, Religious and Lay Faithful in the Catholic Diocese of Enugu’ on Saturday in Enugu.

Onaga banned them from having anything to do with the Adoration Ministry.

The letter said, “In the light of the happenings in the Catholic Adoration Ministry Chaplaincy Enugu, capable of undermining the Catholic faith and teachings and after several fraternal corrections and admonitions to Fr. Ejike Mbaka, the Chaplain of the Ministry.

“Having given him pastoral directives and guidelines for the Ministry Chaplaincy, which he persistently violated.

“In fulfilment of my pastoral duties as the Chief Shepherd with the obligation to promote and safeguard the Catholic faith and morals in Enugu Diocese, I hereby prohibit all Catholics (clergy, religious and lay faithful) henceforth from attending all religious and liturgical activities of the Catholic Adoration Ministry until the due canonical process initiated by the Diocese is concluded.

He, however, enjoined “all Christian faithful to keep praying for Fr. Mbaka.”

The ban came a few hours after Mbaka apologised to Mr Peter Obi, the Presidential candidate of the Labour Party for the 2023 general election.

The controversial priest had during one of the adoration programmes a few days ago declared that Obi, who he described as “a stingy man”, would never rule Nigeria.

He had said that until Obi came and knelt before the adoration alter that his presidential ambitions would be in vain.

The outburst did not go down well with many Nigerians, especially the youths who had fallen in love with Obi’s candidature as they recommended appropriate sanctions be given to him.

Mbaka’s comment also set social media on fire as many condemned it.

However, this is not the first time Fr. Mbaka is facing sanctions from the Enugu Catholic Diocese over political comments.

The Diocesan authority had last year, after placing his activities on hold for a month, also converted the adoration ministry to chaplaincy and he was then asked to keep off politics.