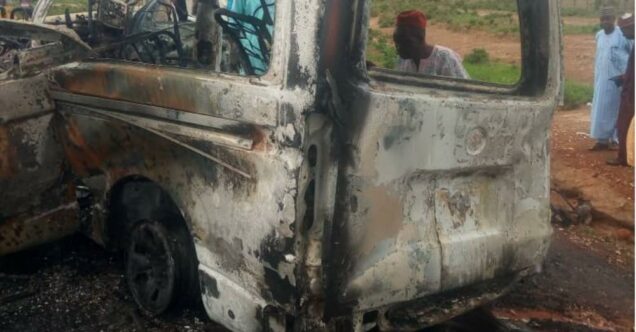 A burnt bus after an accident

No fewer than 18 people were killed when a passenger bus from Lagos hit a truck on a highway near Gidan Kwano village in Bosso local government area of Niger state.

The collision triggered a fire which burnt 18 people beyond recognition.

Abiodun Wasiu, the police spokesperson in the state disclosed this at a press briefing in Minna, the state capital.

One person was also injured in the accident, which occurred in the early hours of Sunday, when the bus ran into a truck parked on the road.

The bus became engulfed with fire, Wasiu said, adding the bus was conveying passengers from Lagos state, southwest Nigeria, to the northern part of the country.

“The bus most likely collided with the truck before catching fire,” he said.

The officer, who said the police had launched an investigation into the incident, advised motorists to always observe traffic rules and regulations.