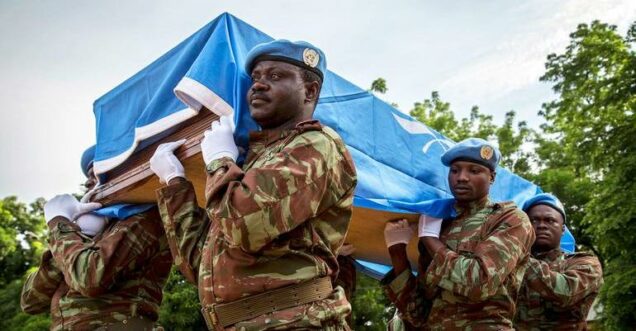 Funeral rite for a UN peacekeeper

UN Secretary-General Antonio Guterres has condemned an attack in Kidal, northern Mali, against a convoy of UN peacekeepers that killed a Guinean soldier.

The Guinean peacekeeper was killed by an improvised explosive device, which detonated during a UN Stabilisation Mission in Mali (MINUSMA) mine detection operation.

In a statement by UN Deputy Spokesperson, Farhan Haq, the secretary-general conveyed his heartfelt condolences to the family of the victim and his brothers in arms, as well as to the people and authorities of Guinea.

Haq said that “the secretary-general reaffirms the solidarity of the United Nations with the people and authorities of Mali in their pursuit of peace and security,”.

Since the beginning of the year, several attacks involving IEDs have been recorded against MINUSMA uniformed personnel, which have killed a number of peacekeepers and injured others.