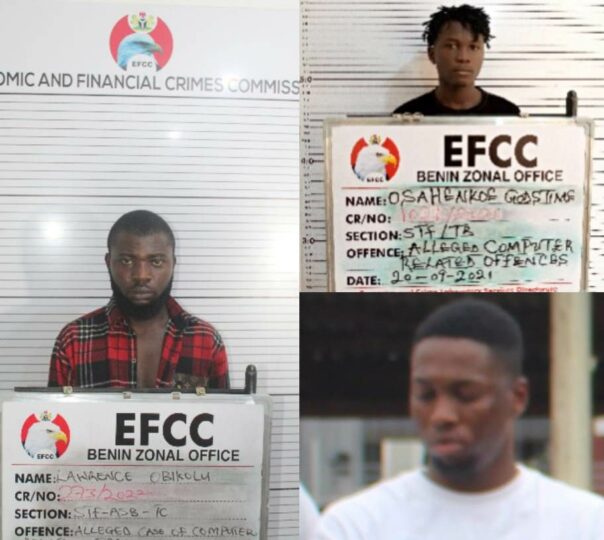 Justice Efe Ikponmwonba of the Edo State High Court in Benin on Tuesday, convicted and sentenced three internet fraudsters to prison for fraud.

The trio, Osahenkhoe Godstime, David Courage Omkagbo, Obikolu Lawrence Chuwuneku, were arraigned on one count charge each by the Benin Zonal Command of the EFCC for fraudulent impersonation and obtaining by false pretence.

The charge against Godstime reads: “that you, Osahenkhoe Godstime (M) between 2020 to October 2022in Edo State within the jurisdiction of this Honourable Court did fraudulently impersonate the identity of one Ashleefx3, an American on your Instagram account with intent to defraud unsuspecting investors in bitcoin business and thereby committed an offence contrary to and punishable under Section 484 of the Criminal Code Cap 48 Laws of Bendel State of Nigeria (as applicable in Edo State) 1976”.

Upon arraignment the defendants pleaded guilty to the charges.

In view of their pleas, the prosecution counsel, I. K. Agwai prayed the court to convict and sentence them accordingly.

However, the defence counsel, Aitenoria Philip pleaded with the court to temper justice with mercy as the defendants were remorseful for their actions.

Justice Ikponmwonba convicted and sentenced the defendants to three years imprisonment each. The duo of Godstime and Omokagbo were given an option of N100, 000 fine each while Chukwuneku got an option of N150,000 fine.

The court also ordered Godstime and Omokagbo to forfeit their cars, Lexus RX350 and Mercedes Benz GLK 2015 model, and mobile phones to the Federal Government of Nigeria.