'There is a problem in the land, we are faced with trilogy' - Akeredolu 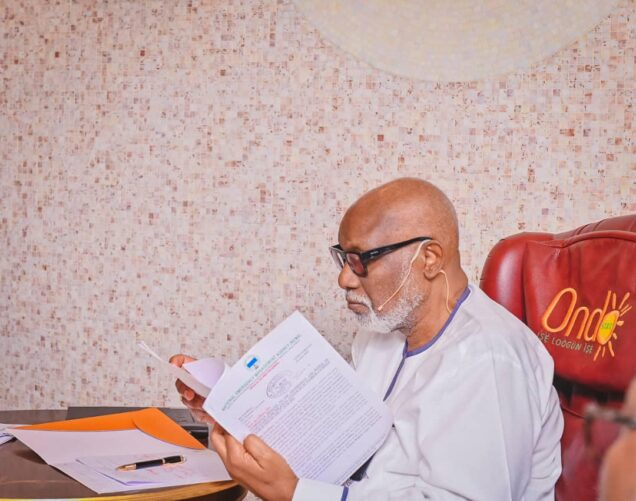 Ondo State Governor, Oluwarotimi Akeredolu on Monday said the Owo terror attack was a calamity that is not easy to bear.

The governor stressed that there is a problem in the land, and prayed that Ondo state and the Southwest, in general, will not experience such mindless killing of innocent people again.

Akeredolu stated this when he received officials of the National Emergency Management Authority (NEMA) who were on a condolence visit to his office, Alagbaka, Akure.

The officials were led by the NEMA Director-General, Mustapha Ahmed, who was represented by the Director, Search and Rescue, Air Commodore Edward Adedokun.

Speaking in his office, Akeredolu said: “It (Owo terror attack) was a calamity that is not easy to bear, but we just have to continue to call on God to give us the strength and fortitude to bear this loss. It was one attack too many. We pray that this will not happen again, that is our prayer.

“If anybody just came up and said it is ISWAP or anything, we have said it here that we don’t believe it. Where is the evidence? ISWAP always claim responsibility for its actions. That is their style, they will want you to know that they have struck. Till today, after two weeks plus, ISWAP had not claimed responsibility. So, it is not ISWAP, it is within us.

“When Professor Soyinka came here, in his own analogy and I totally agree with him, he said that we are faced with ‘trilogy’. The trilogy has the Fulani herdsmen in front destroying our farms and killing our people, followed by Boko Haram, and now ISWAP. What we can see here is that they work individually and they also work together.

“So, there is a problem in the land. It is not only here. This kind of mindless killing had never happened in Ondo state before. Totally mindless.” Governor Akeredolu said.

While appreciating them for their response, the Governor equally advised NEMA to have an office in each state across the country for quick response to emergencies.

He noted there is no way combining two states will be effective in terms of providing emergency services.

Earlier, the NEMA DG said the officials were in the state to commiserate with the Governor and the people of the state over the unfortunate incident which claimed 40 lives and injured several others at St Francis Catholic Church, Owo.

He further informed the Governor that the Authority has brought relief items including food and non-food materials to about 120 persons that were affected by the unfortunate incidents.

The DG expressed shock over the terror attack, describing it as callous and reprehensible.