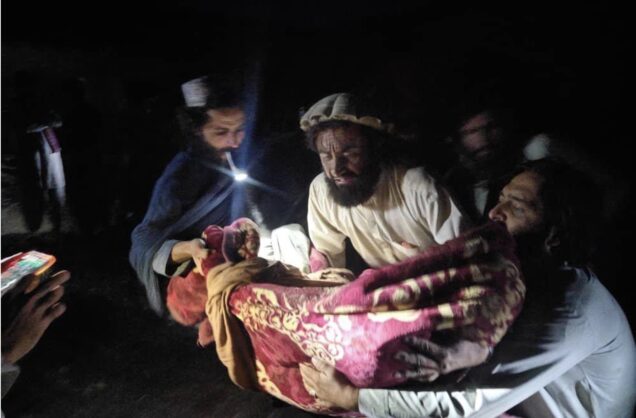 A survivor of the Afghanistan earthquake receiving help

Death toll in Afghanistan earthquake has reached 1,000 with over 1,500 others injured, Taliban officials have said.

The earthquake is the deadliest the country has witnessed in over two decades.

The earthquake struck about 44km (27 miles) from the south-eastern city of Khost shortly after 01:30 local time (21:00 Tuesday GMT), when many people were asleep at home.

An earlier condolence message by the Taliban’s supreme leader stated that only up to 300 people were killed and more than 500 wounded in the tragedy.

The 6.1-magnitude quake had affected the country’s Paktika and Khost provinces the most.

It was not immediately clear how many houses were destroyed or damaged in the region due to the extent of the crisis.

Taliban leader Hibatullah Akhundzada told the BBC that hundreds of houses were destroyed and the death toll was likely to rise.

The head of information for Paktika province, Mohammad Amin Hazifi, confirmed that 1,000 people had died and 1,500 were injured.

According to dpa, the authorities in Kabul said military helicopters, as well as ambulances from neighbouring provinces, had been dispatched to the scene to speed up the rescue operation for the victims, who were mostly trapped under rubble.

But the mountainous and deserted areas made the rescue operations difficult, according to the country’s state minister for disaster management.

“There is a huge horror everywhere. The parents can’t find their children and vice versa, everyone is asking who is alive or dead,’’ Rahim Khan Khushal,

Khushal, a local journalist, said he visited the worst-hit Gayan district in Paktika.

He explained that all the houses in the village were made of mud and all had been destroyed.

“The jolt has not given the people the chance to leave their houses,’’ he added.

Several countries in the region such as Pakistan, China, and India were quick to extend their condolence messages.