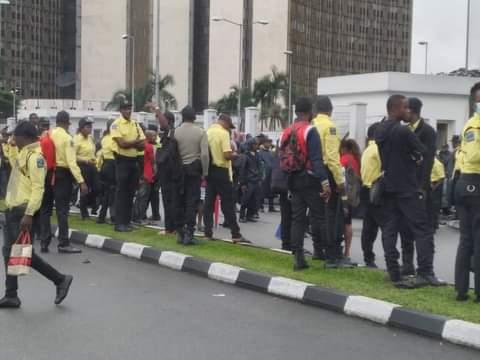 Members of the Rivers Neighborhood Safety Corps, popularly called “Governor Wike Police” yesterday occupied the gate of the of Government House in Port Harcourt to protest the non-payment of their 15 months’ salary.

Scores of members of the Corps, who were fully kitted in their in official uniforms sang solidarity songs.

They vowed that if after occupying Government House, they did not receive favourable response they would take the protest to Governor Nyesom Wike’s private residence along Ada George road in Port Harcourt.

Director of Operations of the Corps, Matthew Iheanyi, during the protest, spoke of how members have been helping the Police.

They also said they have been playing key role in State Government’s fight against illegal activities of artisanal refiners, cultism and other criminal activities in State.

They also said they provide credible information to security agencies in the various local government Council areas where they are deployed.

In reaction, Director-General of the Rivers State Neighborhood Safety Corps, retired Assistant Commissioner Police ACP, Dr. Uche Chukwuma, assured that a memo concerning payment of salary and the outstanding salary arrears has been sent to the state government and it is receiving the needed attention.