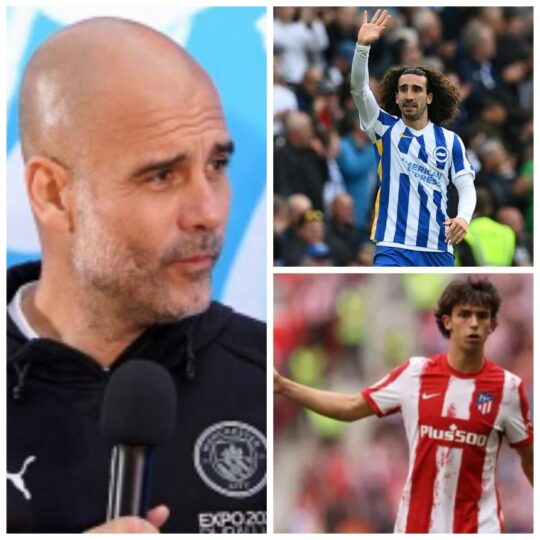 Manchester City have agreed terms with Brighton full-back Marc Cucurella, according to reports.

The defender has been chased by the club as they aim to reinforce their backline. This comes after speculation that Oleksandr Zinchenko could be about to leave for Arsenal in search of more game time.

Cucurella, who scored his first Premier League goal against Manchester United in May’s 4-0 rout, only joined the Seagulls last year.

However, Football Insider reported that the 23-year-old has accepted personal terms with the Premier League champions, albeit a price has not yet been agreed upon.

The futures of Gabriel Jesus, Raheem Sterling, and Bernardo Silva are all uncertain and at least one of them is tipped to leave this summer.

City still have wide men Jack Grealish, Phil Foden, and Riyad Mahrez at their disposal, but Guardiola may wish to replenish his stock should a number of attackers depart.

CNN Portugal journalist Bruno Andrade claims the Catalan coach has eyes on Felix, though a move for him would only arise should both Jesus and Sterlin

He tweeted: ”[Erling] Haaland may not be the only strong reinforcement: Pep Guardiola wants João Félix at Manchester City.

“Trading, however, essentially depends on the departures of Gabriel Jesus and Sterling. It’s about opening up space in attack and, above all, balancing financial fair play.”