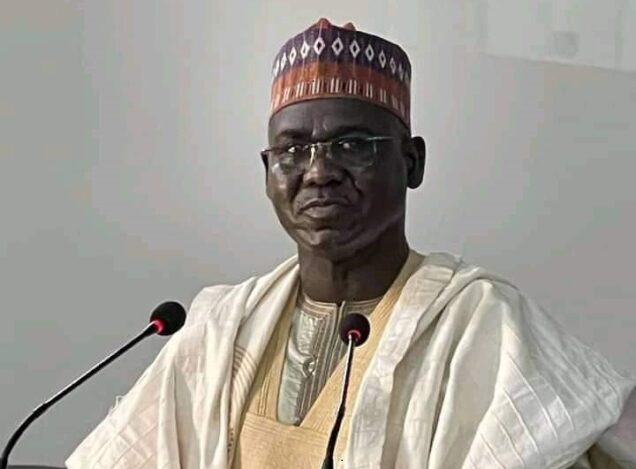 About N1.85 billion in cash has been recovered from a house and office in Abuja said to belong to former Chief of Army Staff, Lt. General Tukur Buratai.

SaharaReporters which first reported this attributed the news to sources in Independent Corrupt Practices and Other Related Offences Commission (ICPC).

Buratai, a retired Lieutenant General was the COAS between 2015 and 2021 and is at present Nigerian ambassador in Benin.

According to the report, ICPC officials stormed the house in the Wuse area, beside the National Open University of Nigeria Campus in Abuja last week after it received a tip-off from a whistleblower.

The huge cash was part of the money earmarked for the purchase of arms and ammunition by the Muhammadu Buhari-led government.

“Last week Thursday, ICPC officials stormed a house in Wuse area of Abuja, beside National Open University and arrested a man, Kabiru Salau after they saw N850 million cash in the house,” a source told SaharaReporters.

“He claimed the money belonged to Tukur Buratai who was in Cotonou at that time.

“Officials of the ICPC took him to an office where another N1billion in cash was also discovered. Also, bulletproof cars, BMW, G-Wagon worth N450m were recovered.”

“Serious pressure is being mounted to claim money found was only N30m,” another source said.

In a press statement, the ICPC’s spokesperson Mrs Azuka Ogugua debunked the report that multi-billion cash and dollars were recovered from Buratai.

The ICPC said the property is owned by K Salam Construction Company, a military contractor.

The commission said contrary to the N1.85 billion being peddled in the media, it only recovered N175,706,500; $220,965; G-Wagon; 2022 editions of BMW and Mercedes Benz cars; customized mobile phones; several designer wrist watches, including three Rolexes, and some property documents.

Put together, the money recovered by the ICPC is N267.43 million rather than N1.85 billion.

The commission disclosed that the Managing Director of K Salam Construction Company Nigeria Limited, Mr. Kabiru Salau had been arrested and that investigation was ongoing.

In March 2021, Nigeria’s National Security Adviser (NSA), Babagana Monguno revealed that funds running into billions of naira meant for the procurement of arms and ammunition under the past service chiefs were unaccounted for.

His revelation came a few months after President Buhari replaced Buratai and other service chiefs.

According to Monguno, neither the money nor the arms were on the ground upon the resumption of the new service chiefs.

“Now that he (President Buhari) has brought new people (service chiefs), hopefully, they will devise some ways… I’m not saying the former service chiefs diverted the money, but the money is missing. We don’t know how, and nobody knows for now,” he had said.

“The President will surely probe this matter. As we speak, the Nigerian Governors’ Forum too is also wondering where all the money went. I can assure you the President takes issues of this nature seriously.

“The fact is that preliminary investigation showed the funds are missing and the equipment is nowhere to be found.

“When the new service chiefs assumed office, they also said they did see anything on the ground.”