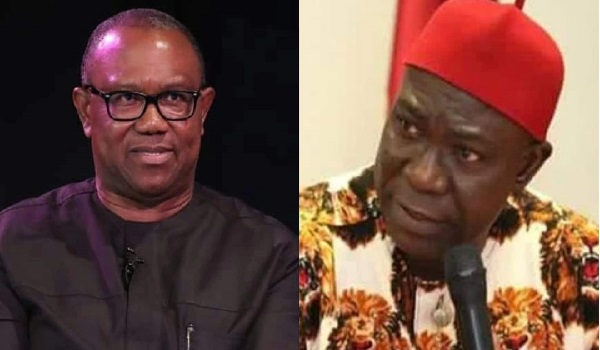 The Presidential candidate of Labour Party (LP), Peter Obi has reacted to the arrest of former Senate Deputy President, Dr. Ike Ekweremadu and his wife, Beatrice Nwanneka in the United Kingdom.

The Nigerian politician, 60 and his wife, 55 were accused of conspiring to bring a child to the UK in order to harvest his organs.

The duo are currently being detained as they have to wait for 14 days for the next court sitting.

Reacting to the development on Friday on his twitter page, Obi sympathized with Ekweremadu and his wife in their travail.

He said he joined all men of goodwill in praying for the healing of their daughter and committed them into God’s hand for justice to be done.

“My family and I are with the Ekweremadu’s over their travail. We join all men of goodwill in praying for the healing of their daughter and commit them into God’s hand for justice to be done,” he tweeted.

However, Ekweremadu and his wife were said to have brought the boy to UK because of their daughter who is suffering from kidney disease.

They duly obtained permission from the British High Commission before the boy was brought, but the only snag is that the would-be-donor is under-aged, creating suspicions.

According to reports, the Metropolitan Police began investigating the case in May this year, before Ekweremadu and his wife Beatrice were arrested, along with the boy-donor at Heathrow Airport on Tuesday.

They were on their way to Turkey and no longer the Royal Free Hospital London.

A potential charge against Ekweremadu was that £20,000  was found on him on at the time of his arrest, according to prosecutors.

This is against the international money laundering  law, which states that no one should physically carry more than $10,000 at a time.