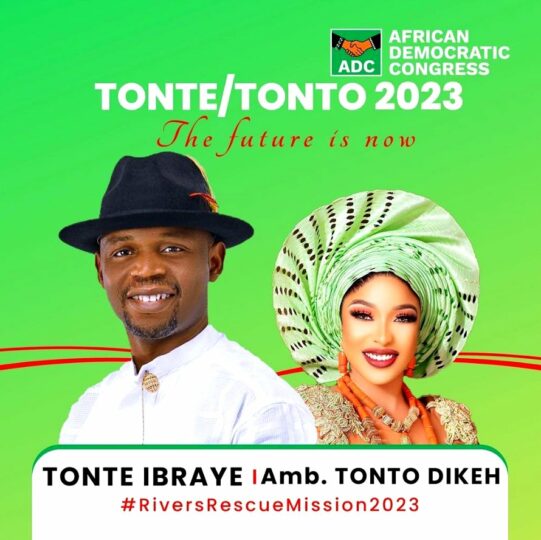 Chief Ralph Nwosu, National Chairman of the party, made the announcement on Friday in Abuja.

Speaking of Dikeh and Mr Tonte Ibraye, the party’s Rivers governorship candidate, Nwosu said: “These two are under 40. They are 37 years old.

“And this is the height of the 2023 general elections.” It is a challenge we are throwing to the people of Rivers and Nigerians generally.

“Within the last ten years, Nigerian youths have been saying they are not too young to run, that they must be carried along in governance.

“And the ADC had decided to signpost that with the team we had put together for Rivers.” So that they can use the state resources not just to play politics but to develop the state and its youths as the human capital base of the country, “he said.

The chairman urged Nigerian youths to support youths at all levels in the forthcoming general elections.

He recalled that youths in the country had been agitating for inclusiveness in politics and governance since the Not Too Young to Run bill was passed into law.

According to him, the party was ready to bring that agitation to pass by bringing on board young aspirants and encouraging them to contest for political offices.

Responding, Dikeh thanked the party’s leadership for the opportunity and appealed to her fans, supporters, and all eligible voters to get their PVCs ready for the task ahead.