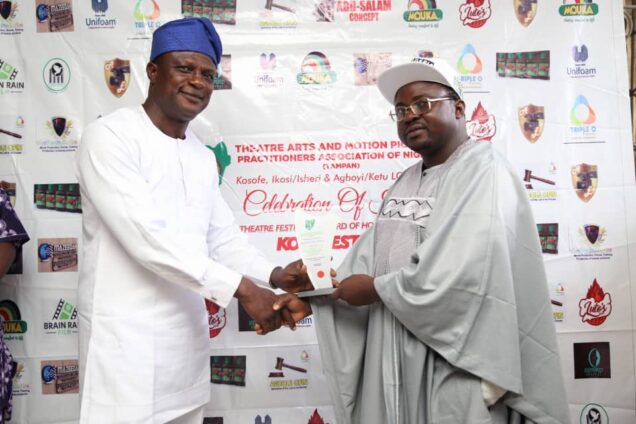 The Theater Arts & Motion Pictures Practitioners Association of Nigeria, Lagos State chapter has presented an award of excellence to a chieftain of the New Nigeria People’s Party (NNPP), in the South West, Mr. Olufemi Ajadi.

Members of the group who came out in their number said the award was in recognition of the positive contributions of Ajadi to the development of the Nigerian society.

The leader of the group, Prince Adesanya Adesina who presented the award urged Ajadi to keep up the good work.

In his acceptance speech, Ajadi thanked the association for the honor.

Ajadi, who was accompanied by a delegation of political associates and personal staff, said the award was appreciated, especially in view of the long-standing contributions of the theatre arts sector.

He also applauded the association for keeping theatre arts performances alive in the midst of the gradual erosion of important cultural values.

He added that it would spur him to greater works.

The chieftain further noted that he had worked out a comprehensive program for the Nigerian entertainment industry which would make it a real pride of the nation.

Ajadi said: “We are all aware of the contributions that the sector has been making to the economic and social development of the country, with the result that is competing favorably with Hollywood and Bollywood.

“That is commendable and our plan is to further lift Nollywood.

“This will complement what the practitioners already have in Asaba, the Delta State capital.

“As for other incentives likely to impact on the personal lives of the practitioners, we will keep it in wraps for now,” he said.

Ajadi also assured that the emergence of NNPP in 2023 will be a major victory for actors and actresses.

He noted that actors will be given more key roles because they have proved that they have what it takes to positively influence Nigerians and further uplift the image of the nation.