Defeat is not an option in the coming election: Oyetola speaks 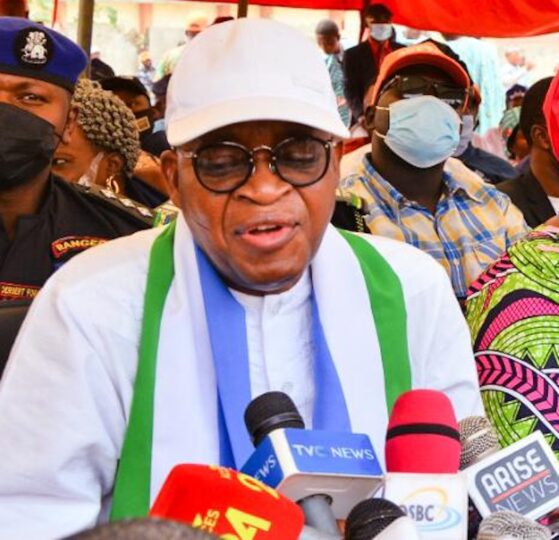 Gov. Adegboyega Oyetola, of Osun on Sunday in Osogbo, expressed optimism that he would win the July 16 governorship election in the state.

Oyetola said this while addressing members of the Osun Chapter of Nigerian Incorporated Electronic Practitioners, during an engagement organized by the Civic Engagement Office.

He said his administration had done enough in the development of the state to deserve its renewal mandate by the electorate.

Represented by Mr. Olatunbosun Oyintiloye, his Special Adviser on Civic Engagement, the governor said he would not be deterred by opposition parties in his quest to get a second term in office.

Oyetola said that the landslide victory recorded by the All Progressives Congress (APC) in the Ekiti governorship election would be replicated in July 16 election in the state.

“For me, defeat is not an option in the coming election. The victory that will be recorded in the election through the popular votes of the electorate will surpass that of Ekiti State.

“We are prepared for the election and it will not be out of place to extend hands of fellowship to everyone to join us in moving the state forward.

“I want to emphasize that failure is not an option, but victory is certain by the grace of God”, he said.

Oyetola also assured the electorate that he would not let them down if he gets a second term in office.

The governor said his efforts to improve workers’ welfare, the economy of the state, education, agriculture, and youth empowerment, among others, would be sustained if he is re-elected

He urged the electorate to get their Permanent Voter Cards (PVC) to support him in the coming election.

He said Friday was declared a public holiday in the state to encourage the potential voters to get their PVCs.

“I still want to implore those who are yet to get their PVC, to go get it because, without it, you cannot vote for me.

“I know you appreciate what will are doing in the state and for you to return the favor, get your PVC and vote for me and APC”, he said.

ln his remarks, the chairman of the association, Mr. Olusegun Ayoyebi, commended the governor on his various developmental projects across the state.

Atoyebi also appreciated the governor for his unique approach to good governance through continuous public engagement.