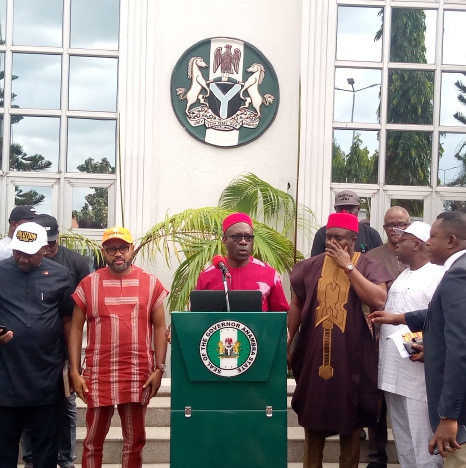 Gov. Chukwuma Soludo of Anambra said the All Progressives Grand Alliance remains the most formidable political party in Anambra and third in Nigeria as the country inches closer to the 2023 general elections.

Soludo, who stated this while addressing party faithful at the Governor’s Lodge Amawbia, Awka South Local Government Area, said some of those who left the party after losing in the recent APGA primary elections had not made the best decision.

He said APGA would contest strongly for all positions it had candidates and that in Anambra, their target was House of Assembly, 30 seats; House of Representatives,11 seats and Senate three seats.

Soludo said, “elections are not done on WhatsApp or the Internet, you have to be on the ground, APGA is on ground here and everywhere, how can a party that does not have a councilor want to compete with us?

“We are strong and we are growing stronger, stand a real chance in Abia, we will compete in all places vigorously,

“It is sad that the people that left had to leave, why would one leave a party he had laboured to build; it is not good to labour in vain; however, they are not contesting election. The election in Anambra is between APGA and other political parties.

“We shall campaign when it starts and by the time we enter January next year, we will know those that are still contesting.

“Our victory will be resounding this time but we will not take anything for granted, Anambra people will see,” he said.

He said the APGA government was determined to deliver value-based governance to the people of Anambra in face of dwindling revenue.

Soludo said about 220 km of road had been designed for construction and that all the 21 Local Government Areas in the state would witness massive road activities soon after the rains were over.

“We are determined to cut the cost to the bones, we have renegotiated some contracts and saved money with which we are fixing some roads.

“We have used N20 million saved from there to fix the Chisco Part area of the Bridge Head-Upper Iweka expressway in Onitsha, but the approval that was presented to me by FERMA for that same job is about N200 million, but by this week it will be done,” he said.

Soludo said the task demanded belt-tightening on the part of the government and people and thanked all for their understanding.

He further assured the leadership and members of APGA of enhanced welfare.