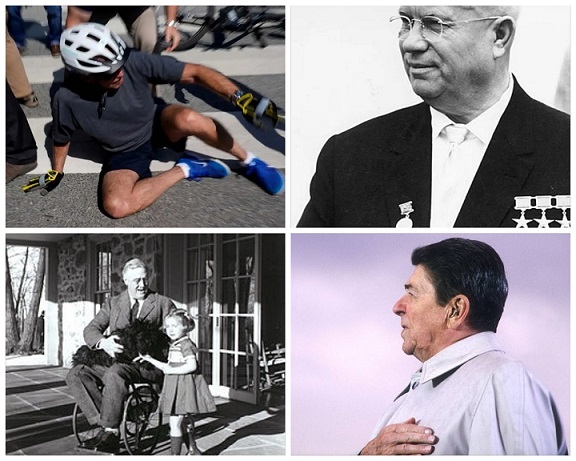 As the 2023 presidential election is inching closer in Nigeria, supporters of different political parties’ candidates are all busy, trying to outdo one another to snatch or swing the public mood in favour of their principals. It is a war for the optics! A propaganda duel. If they do not rake up mud to smear a particular candidate or doctor some videos to suit a purpose, they will have a go at his health status, citing instances of when he staggered when walking or talking. These boil down to what philosophers who specialise in logic called argumentum ad hominem. Why should Nigerians not concentrate on what the candidates have to offer to make Nigeria grow and compete well in the comity of nations? Who among the candidates will improve every citizen’s human development index? These should be the main concerns.

In other countries, leaders show frailties and, from time to time, exhibit faux pas, yet their citizens concentrate on the issues to move forward. On Saturday, 18 June, US President, Joe Biden, fell when he tried to get off his bike. That was at the end of a ride at Cape Henlopen State Park near his beach home in Delaware. The news of that fizzled out that week and was overshadowed by the US Supreme Court’s verdict against abortion rights, a development that sparked public protests.

The same Biden, as reported by The Independent, stumbled up the stairs of Air Force One as he boarded the presidential plane at Andrews Airforce Base to fly to California. “Mr Biden, 79, briefly tripped and put his hand down to regain his balance as he made his way up the steps onto the plane. It is the latest in a string of slips on the stairs for the commander-in-chief…” It was the third of such falls in four months. It also happened in March 2021. In the same country, Franklin Delano Roosevelt, the 32nd president of the United States from 1933 until he died in 1945, was, at a point, left permanently paralyzed from the waist down. He was diagnosed with poliomyelitis. We all remember his New Deal during the American depression.

The late President Ronald Reagan started wearing a hearing aid in his right ear. Mr Reagan’s hearing problems, as New York Times put it,  date from the 1930s “when a 38-calibre pistol was fired near his right ear while he was acting in a movie.”

To the Americans, where institutions are stronger, issues are much more important than the person or the frailties of the president.

There was the 12 October 1960 alleged shoe banging incident when Nikita Khrushchev, the Soviet leader, pounded his shoe on his delegate desk.  That was in protest at a speech by Philippine delegate Lorenzo Sumulong during the 902nd Plenary Meeting of the United Nations General Assembly held in New York City.

Though many claimed he did not bang it, American scholar, William Taubman, was quoted by New York Times as writing that he had interviewed some eyewitnesses who said that “Khrushchev had brandished his shoe but not banged it.” Every leader has one weakness or the other.

The  columnist, Mahmud Jega, has a catalogue of many of them, as contained in his Thisday article:

Snafus of the Powerful

The splash story at the weekend of US President Joe Biden falling off a bicycle allowed me to see the truth in what the philosopher of history E H Carr once wrote, that not everything that happened is a historical fact. During my primary and secondary school days, I often fell off a bicycle that I hired from Imamu Shehe’s shop near my grandfather’s house, but no newspaper ever reported that fact. Is a fall from a bicycle not a fall from a bicycle?

President Biden was attempting to dismount from his bicycle during a morning ride in Rehoboth Beach, Delaware to speak with some well-wishers near his vacation home. Instead, his 79-year-old legs got caught in the pedal and he fell over. His large Secret Service detail rushed to his aide but he stood up and said he was okay. The White House quickly borrowed a leaf from Nigerian media managers. Instead of blaming PDP, the White House press office blamed the president’s bike pedal for the mishap. The event happened in broad daylight and since White House press pool reporters and cameramen follow the US President everywhere he goes, just short of the bedroom, videos from smartphone cameras were soon streaming all over the world’s airwaves.

I thought by now Americans had gotten used to the fact that snafus happen even to the most powerful persons. In 1975 I think, US President Gerald Ford arrived at Tokyo airport for a visit to Japan and, while descending the stairs of Air Force One, he fell and tumbled to the ground. The Japanese Prime Minister waiting at the foot of the plane to receive him rushed forward and helped Mr Ford to his feet, his jacket a bit rumpled.

Two or three years later in the late 1970s, Newsweek magazine published a picture of Ford’s successor, President Jimmy Carter, being chased by a large carp during a fishing trip in a Georgia creek. Carter was rowing alone in a canoe and he frantically used his paddle to chase away the open-teethed fish. I thought at the time that the Commander-in-Chief of the world’s most powerful nuclear arsenal had to defend himself with a paddle since his Secret Service guards were sitting on the river bank.

Nor did presidential holiday snafus end with Jimmy Carter. In 1991 or so, President George Bush Senior was on a fishing trip in Kennebunkport, Maine when he swung a fishing hook to catch a fish and the hook promptly caught the president’s ear. White House medics rushed to the scene, removed the hook and gave the president an anti-tetanus shot, just in case.

It was at least his ear that Mr Bush caught but years later, Dick Cheney, who was Vice President to Mr Bush’s son George Bush Jnr, was on a hunting trip in Wyoming when he shot what he thought was a quail. It turned out that he had shot a man! The victim survived because he was shot with pellets, not bullets. I cannot remember if police pressed charges against Mr Cheney, the standing hardliner of the Bush Jnr Administration.

Not only US Presidents, but their top aides often had snafus of their own. In 1971 when Secretary of State Henry Kissinger went on a secret trip to Beijing to lay the ground for “playing the China card” against USSR, he was seen wearing an oversize shirt. Kissinger later explained in his memoirs that during a secret stopover in Karachi on his way to Beijing, his staffers forgot the suitcase bearing his clothes, so he had to borrow a shirt from one of them for his historic meeting with Chairman Mao.

It wasn’t so much a snafu, but there was this historic 1966 photo of Chairman Mao swimming dog-style in the mighty Yangtze Kiang river, with only his head visible above the water. As we read in the captions, it was at the beginning of the Great Proletarian Cultural Revolution, when the Chinese Communist Party purged many of its top leaders.

Field Marshal Idi Amin Dada of Uganda, too, did one mighty splash in the late 1970s. DRUM magazine published three pictures of the huge man, side by side. He was walking to the swimming pool clad only in pants. He then stood on the plank above the pool, and the next minute he powerfully dived in. The three-part photo caption said, “On a hot day in Kampala… President Idi Amin Dada…Made a brief appearance.”

Other powerful leaders’ snafus made worldwide headlines over the years. During a trip to West Germany in 1980 or so, General Secretary of the Soviet Communist Party Leonid Brezhnev could not stand up from his chair after meeting with Chancellor Helmut Schmidt. Veteran Soviet Foreign Minister Andrei Gromyko quickly grabbed Brezhnev’s arm and helped him to his feet. The Soviets did not have the rule of the Nigerian Armed Forces, that a junior officer cannot touch a senior officer without his permission, even if he is dying. Remember the story told by General Sani Abacha’s Chief Security Officer Major Hamza Al-Mustapha, that when he rushed to a guest house and found Abacha unconscious, he shouted several times, “General Abacha, can I touch you?” When no permission was uttered, he could not touch the dying Head of State.

There was this famous 1978 picture of Indian Prime Minister Morarji Desai, who was over 80 years old at the time, drinking from a small cup. It was his urine that he was drinking, the photo caption stated. Desai, a conservative Hindi gentleman, believed that human urine was a very efficacious medicine. Probably no VIP snafu, if it could be called that, exceeded the story that broke in the mid-1970s. French newspapers alleged that Elizabeth Bagaya, Princess of Toro, Foreign Minister of Uganda, was caught having sex with a Whiteman in a toilet of Orly Airport in Paris. She denied it, but Field Marshal Idi Amin sacked her.

Here in Nigeria, reporters attached to Aso Rock and Government Houses can be trusted not to report VIP snafus, which is why we don’t get to hear about them or see them on TV screens. Unless they happen out in the open. In 1974, when Head of State General Yakubu Gowon was paying a visit to a certain state, airport cargo handlers were unloading boxes from an advance plane when a box fell open and Mrs Victoria Gowon’s wigs spilt on the tarmac. All the VIPs lined up at the airport to receive the Head of State pretended that they did not see it.

In Sokoto in 1996, it was a small scandal when a Sultan’s Palace limousine, with Sultan Muhammadu Maccido sitting inside, drove into a petrol station for a refill. The Sultan was at the airport to receive the newly posted Military Administrator of Zamfara State, Colonel Jibrin Bala Yakubu. Unexpectedly, the new Milad requested the Sultan to accompany him to Gusau to smoothen his takeover of half of the state. The Sultan agreed but as they made to drive out of town, the shivering driver announced that he did not have enough fuel for the sudden trip. So the Sultan said, “Let’s enter the petrol station.”

Military rulers did more than that. In 1997, the Military Administrator of a Northern state, a policeman, was about to depart Kaduna for his state when he was told to proceed to Abuja. On the way, his aides told him that the State Lodge in Abuja was not ready and they did not have money to pay for a hotel, having exhausted their funds in Kaduna. It was already dark when they got to Tafa, so the Milad stopped the motorcade, pulled off his police uniform, wore mufti and told everyone to go and find a place to sleep and reassemble at 7 am. The Milad then disappeared, allegedly into a cheap roadside hotel, only to reappear in the morning and continue the journey to Abuja.

Let us close with this one. During the Second Republic years, there was the story of a Northern state governor who was on a tour of his state. In those days, governors regularly went on a tour of their local government areas, with long vehicle convoys on mostly dirt roads. His Excellency the Governor was pressed so his car suddenly screeched to a halt in the middle of the bush. Aides rushed out from other vehicles to see what was wrong, only to see the Governor grab a water bottle and dash into the bush. Everyone quickly pretended that they did not see what happened.

*Mahmud Jega is a jounalist and public affairs analyst