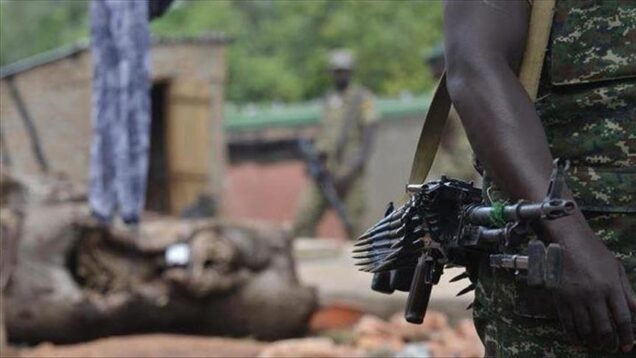 A Cameroonian soldier in western Cameroon

Five Nigerians were among the 30 people killed in an ethnic-related attack in western Cameroon at the weekend, multiple sources said on Monday.

The attack took place between Friday and Sunday in the village of Mesaka in the Akwaya commune bordering Nigeria, according to a local church and media reports.

The Cameroon News Agency (CNA) said these people were killed in an “inter-tribal clash,” and “young men, women, children, and the elderly were massacred.

Some were killed in their houses, while others were beheaded, and more were shot on their way to farms.”

Many houses were torched

“It all began with a land dispute between the Oliti and Messaga Ekol ethnic groups,” Reverend Fonki Samuel Forba, moderator of Cameroon’s Presbyterian Church in the southwest, said in a statement on Monday.

“The Oliti people then mobilized and got the support of hired armed men and started very violent, inhuman, and deadly attacks on the Messaga Ekol People,” the preacher said, adding that “more than 30 people were killed, including five Nigerians.”

The governor of the South West region, Bernard Okalia Bilai, confirmed the incident without providing any details on the circumstances or the exact number of casualties.

The Women Peacebuilder’s Network, an NGO of women activists and civil society in northern Cameroon, said in a statement on Monday that 32 people were killed and several houses were burned and destroyed.