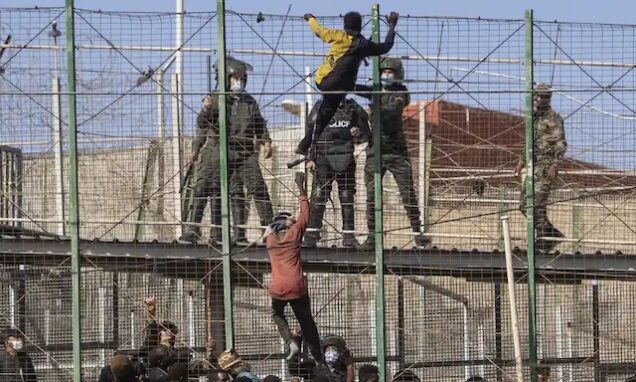 African migrants trying to cross from Morocco into Melilla Spain

The African Union has called for an investigation into the deaths of many African migrants at the Spanish border town of Melilla at the weekend.

Officially 23 migrants died, but some reports put the death toll at about 100.

AU chief Moussa Faki Mahamat voiced his shock at the “violent and degrading” treatment of the African migrants trying to cross from Morocco into Spanish territory.

On Friday, approximately 2,000 migrants stormed the heavily fortified border between the Moroccan region of Nador and the Spanish enclave of Melilla.

According to Moroccan authorities, 140 police officers were wounded in the ensuing violence.

It was the heaviest death toll in years of such attempts to cross the frontier into Melilla.

In a statement via Twitter on Sunday, Mahamat said: “I express my deep shock and concern at the violent and degrading treatment of African migrants attempting to cross an international border from Morocco into Spain.”

“I call for an immediate investigation into the matter and remind all countries of their obligations under international law to treat all migrants with dignity and to prioritise their safety and human rights, while refraining from the use of excessive force,” he added.

Moroccan authorities said a stampede by the migrants caused the deaths, as they attempted to climb the iron fence that separates the city of Melilla and Morocco.

Meanwhile, Spanish Prime Minister Pedro Sánchez condemned what he described as a “violent assault” and an “attack on the territorial integrity” of Spain.

“If there is anyone responsible for everything that appears to have taken place at that border, it is the mafias that traffic in human beings,” Sánchez said.

His remarks came as the Moroccan Association for Human Rights shared videos on social media that appeared to show dozens of migrants lying on the ground, many of them motionless and a few bleeding, as Moroccan security forces stood over them.

“They were left there without help for hours, which increased the number of deaths,” the human rights group said on Twitter.

It has called for a “comprehensive” investigation.

In a statement released late Friday, Amnesty International expressed its “deep concern” over the events at the border.

The International Organization for Migration and UN refugee agency UNHCR also weighed in with a statement that expressed “profound sadness and concern” over what happened at the Morocco-Melilla border.

The mass crossing attempt was the first since Spain and Morocco mended relations after a year long dispute related to Western Sahara, a former Spanish colony annexed by Morocco in 1976.

The thaw in relations came after Spain backed Morocco’s plan to grant more autonomy to the territory, a reversal of its previous support for a UN-backed referendum on the status of Western Sahara.