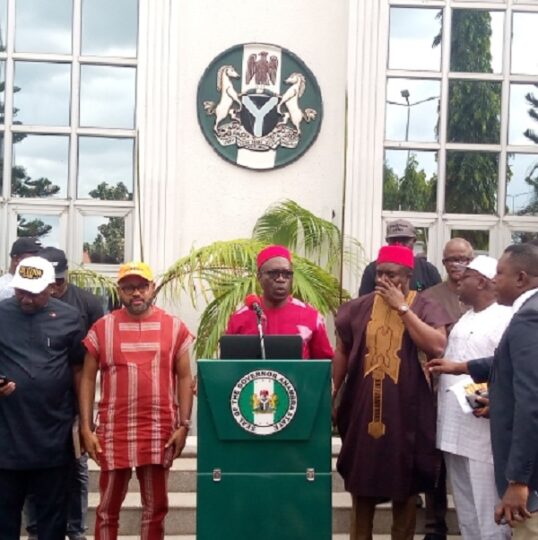 Gov. Chukwuma Soludo of Anambra has warned that states may no longer pay their basic bills if they don’t move away from FAAC-based revenue to an agriculture-driven economy.

Soludo, an erudite economist, said this at a parley in Awka on the occasion of his 100 days in office.

He said the larger Nigerian economy was facing dwindling fortune due to non contribution of the petroleum revenue, noting that the development was having negative effect on revenue accruing to states.

“Since February this year, the share of oil in the revenue that comes to the Federal Government and States is zero, I saw the table, zero contribution from oil.

“What we share now is revenue from customs duties, VAT and company tax and most states can not pay salary because there is no oil money,” he said.

Soludo said his administration was already embarking on an aggressive agriculture-based economy.

He recalled that the old Eastern Region experienced the highest economic prosperity when it was dependent on revenue from only palm oil.

The Economist said Anambra had decided that on a permanent empowerment programme, it would give people palm and or coconut seedlings which they could start harvesting and making money in a maximum period of five years.

“This is why we say we are going back to where Late M.I. Okpara stopped; he built Eastern Nigeria with money from palm oil.

“Cities of Onitsha with the Main Market; Enugu, University of Nigeria, Nsukka; Port Harcourt, Calabar, Aba and the rest were built with palm; they were well planned with pipe borne water and electricity.

“But all these were abandoned with the discovery of crude oil and revenue from it, but there is enormous room to maximise our potential in Palm production.

“Malaysia came to Eastern Nigeria to collect samples of palm but today, their export of palm is far more than Nigeria is exporting in crude oil and today, we go to Malaysia to get improved seedlings that mature between 4-5 years.

“A household that gets about 30 or 40 seedlings is out of poverty permanently; so the government wants to plant about one million seedlings every year for the next 10 years and if we achieve that, it will give us more revenue than FAAC and IGR,” he said.

Soludo said the state would not borrow for consumption but would continue to take salary as given, noting that local government and state civil servant retirees were owed N14 billion and N7.6 billion in gratuity.

“We will also ensure that pensioners who retired since 2018 are paid their gratuities.”