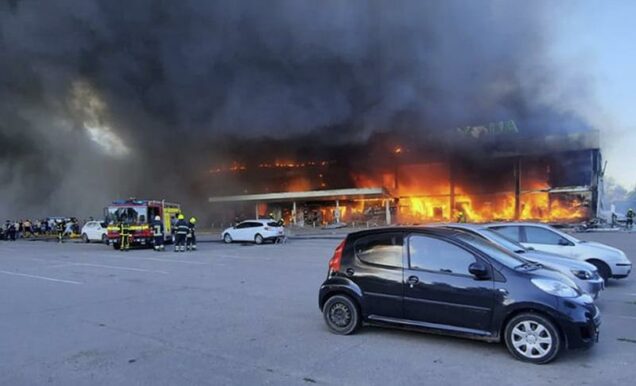 The shopping mall in Kremenchuk hit by Russian missiles

A Russian missile has struck a crowded shopping mall in Ukraine’s central city of Kremenchuk, with scores of people now feared dead.

Preliminary report said at least 13 people were dead and more than 40 wounded.

Ukrainian President Volodymyr Zelenskyy said in a Telegram post that the number of victims was “unimaginable.”

He said more than 1,000 civilians were inside at the time of the attack.

Zelenskyy said the mall presented “no threat to the Russian army” and had “no strategic value.”

He accused Russia of sabotaging “people’s attempts to live a normal life, which make the occupiers so angry.”

The strike occurred as Western leaders pledged continued support for Ukraine, and the world’s major economies got ready to pursue new sanctions on Russia, including a price cap on oil and higher tariffs on goods.

Meanwhile, the U.S. appeared ready to respond to Zelenskyy’s call for more air defense systems, and NATO planned to increase the size of its rapid-reaction forces nearly eightfold — to 300,000 troops.