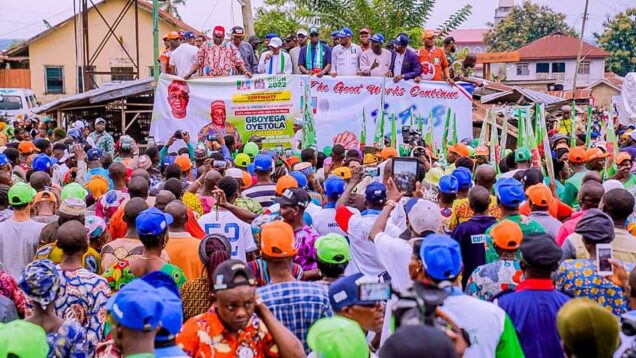 Gov. Adegboyega Oyetola of Osun, has pledged to restore the lost glory of Modakeke by providing basic infrastructure in the community, if re-elected.

Oyetola made the pledge at St. Stephen Grammar School, Modakeke, Ife East Local Government Area of Osun, during his campaign to the area on Monday.

He also promised to complete the abandoned Famia to Itaasin road among other roads, saying that potable water, free education, quality healthcare delivery would be provided for the people if re-elected.

The governor admonished the electorates to ensure that they get their Permanent Voters Cards (PVCs) before in order to have a say on who occupies the governor’s office on July 16.

“As you came out enmass to welcome me to Modakeke today, so also I want you to pull crowd on the election day.

“Without your PVC in your hands, there’s nothing you can do; for your PCV is your power and you have to use it judicially and judiciously,” he said.

The APC governorship candidate seeking a second term advised the electorate to ensure that they get to their polling centres punctually on the election day and vote for him.

“It’s when you’ve voted for me that all promises during campaign would be fulfilled,” he said.

Oyetola assured the residents that they would all enjoy the dividends of democracy, if he was given the mandate again.

The Chairman of the All Progressives Congress (APC) in Osun, Prince Gboyega Famodun, called on the citizenry to vote for Gov. Oyetola.

Oyetola, who promised not to disappoint the people of Modakeke, urged them to support him with their votes.

Oba Toriola welcomed the governor and his campaign team, and commended him for all he had done in the town.