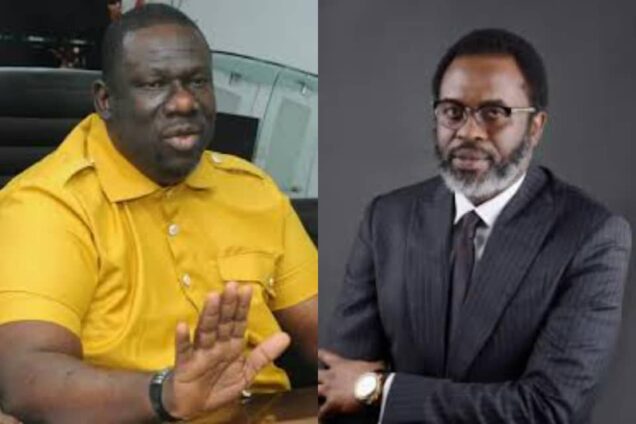 Onigbanjo fired back, saying Omotola lied and that he is a fugitive running away from the law.

“The allegations by Mr. Lai Omotola are therefore refuted and unfounded. Furthermore, by his actions, Mr. Lai Omotola is now a fugitive and anyone who has information about his whereabouts should inform the nearest Police station so that he can be arrested and brought before the court,” he had said in a statement.

However, Omotola’s counsel, Lukman Imam in a letter to Onigbanjo, warned that the AG had seven days to retract the fugitive statement or face legal action.

“Finally, it is disheartening you referred (Onigbanjo) to our client as a fugitive when your office is not that of a law enforcement agency or the Minister of Interior. The office of the Hon. Attorney General is to prosecute, not to persecute.

“Your describing our client publicly as a fugitive has extensively damaged his image, destroyed his reputation and negatively affected his corporate image as a business executive.

“Take notice that unless you withdraw the offensive word and publicly apologise to our client within 7 work days of receiving this letter, we shall follow our client’s instruction to institute a civil suit against you to redeem his image and business reputation,” the letter said.

According to the letter, contrary to misleading assertion in “your said response, it is an incontrovertible and well established fact that our client’s purported signature on a statement allegedly made by him at Zone 2 Police Command, Onikan, Lagos was forged as confirmed by the Forensic Science Laboratory, Alagbon, Lagos.

“It is also an unchallengeable fact that the said purported statement is part of the proof of evidence with which you filed the aforesaid suit against our client. The aforesaid forensic report was brought to your attention vide our letter dated 8th July, 2021.

“Therefore, our client’s statement that your office filed charges against him with forged documents is not out of place. It is the hard truth. Our client was the Complainant at Zone 2 Police Command, Onikan, Lagos. How a Complainant suddenly metamorphosized into an Accused Person with forged statement and without a petition against him at the said Zone 2 continues to remain a mystery.

“Contrary to mendacious allegations in your said response that our client in 2020 forcefully dispossessed one Mrs. Olabisi Olatokunbo of the piece of land, the subject matter of the purported charge, the same Mrs. Olabisi Olatokunbo in Suit No: ID/5319LMW/2017 (filed by her and pending before Hon. Justice Adebiyi of Ikeja
High Court) has stated on oath that her predecessors in title actually dispossessed her of the land as far back as 2017.

“Furthermore, contrary to assertion in your said response that there was a petition against our client at Zone 2, Onikan, Lagos which gave rise to the charges filed against him by your office, reports of investigation (as contained in a letter dated 4th April, 2022 addressed to your office by the office of the Inspector General of Police) have revealed and categorically stated that no such petition against our client was submitted, not to talk of being approved, let alone being treated or investigated by the office of AIG Zone 2, Onikan, Lagos.”

The letter added that contrary to the AG’s claims that the DPP received a duplicate file of the case from Zone 2 for legal advice, investigations by the office of AIG Zone 2, Onikan, Lagos and those of AIG Force CID Annex, Alagbon, Lagos and the Inspector General of Police had revealed that no official letter was written not to talk of being forwarded by the office of AIG, Zone 2 to your office or that of DPP asking for any legal advice.

“We hereby challenge the office of DPP to produce such letter and furnish us with a copy of same,” it added.