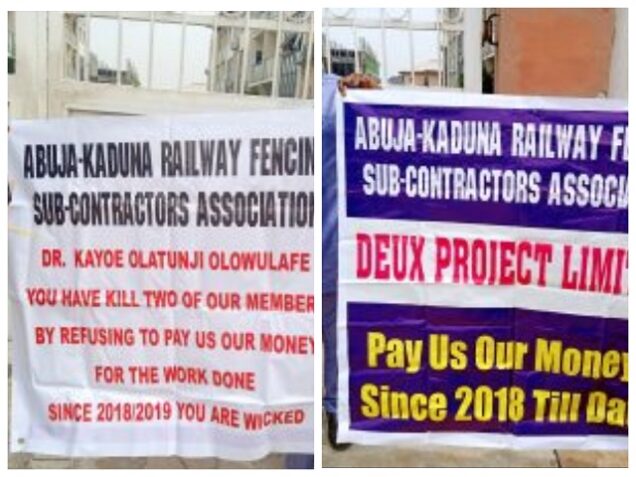 The Railway contractors protesting in Abuja on Monday

The Abuja-Kaduna Railway Fencing Sub-Contractors Association on Monday, in Abuja protested over non-payment of N500 million debt owed them by Deux Projects Limited since 2018.

The News Agency of Nigeria (NAN) reports that the protesters carried placards with different inscriptions such as “Deux projects, pay us our money since 2018’’ and “Deux Projects Limited you are a 419 pay us our money’’.

The placards also included “Dr Kayode Olatunji Olowolafe, you have killed two of our members by refusing to pay us our money for the work done since 2018/2019, you are wicked’’.

Enechuku called on the Federal Government to intervene on the issue as some of their members were in jail due to non-payment of loan they collected.

According to him, the protesting contractors have been agitating over the debt owed them without success.

He said the chairman of the company promised to pay the contractors but failed to fulfill the promise.

According to him, members of the association always come from Lagos, Delta, Onitsha, whil many have died others are bankrupt.

“Many contractors sold their properties to execute the projects only to be deceived.

“The worse part, they worked under most precarious situation as they were risked being kidnapped, after all the sacrifices their paymasters are engaging in hide and seek,’’ he said.

A staff of the Deux Projects Limited, who did not what his name mentioned, told the News Agency of Nigeria (NAN) that the company would pay the contractors in due time.

“I don’t have anything to say because the person they came to see is not around; so, I am not allowed to address them.

“The officer they came to see travelled to Lagos to discuss the contractors’ issue,” he said.

He advised them to call the chairman because most of them have his contact.