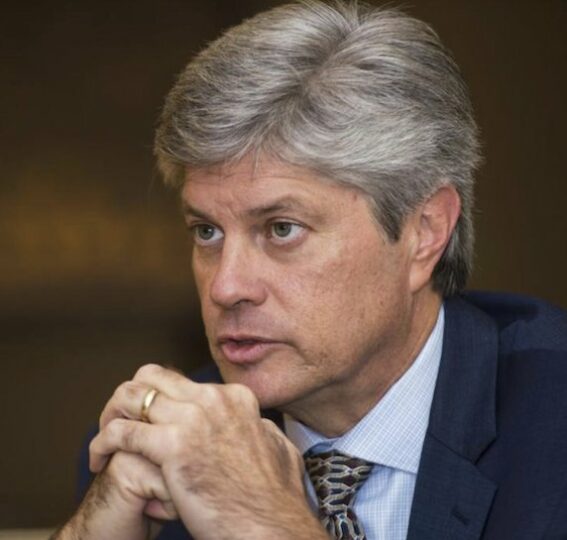 Former Republican U.S. Rep. Jeff Fortenberry of Nebraska was sentenced Tuesday to two years of probation, a $25,000 fine and community service for lying to federal authorities about an illegal campaign contribution.

He was sentenced on the same day that voters in his district were deciding on his replacement in a special election.

Fortenberry, 60, was sitting quietly as a federal judge read the sentence in a Los Angeles courtroom.

The former congressman resigned in March shortly after a California jury found him guilty in the corruption case. He has maintained his innocence and said he plans to appeal.

Fortenberry chose not to address the court.

Judge Stanley Blumenfeld Jr. said Fortenberry “turned a blind eye and a deaf ear” to indications that the source of his donations was illicit, but he said Fortenberry was by all accounts – including prosecution witnesses – “a man of exceptional character.”

When Blumenfeld wished him luck, Fortenberry said, “Thank you.”

Prosecutors were seeking six months in prison for Fortenberry, while his attorneys had requested probation.

In delivering the sentence, which includes 320 hours community service, Blumenfeld cited cases of more significant public corruption that led to prison sentences of about a year and said he didn´t think incarceration would serve a purpose in this case.

The sentence was handed down as a special election was taking place to fill the rest of his term, which ends in January. Republican state Sen. Mike Flood faces a fellow legislator, Democrat Patty Pansing Brooks, in the GOP-leaning eastern Nebraska district.

Prosecutors alleged Fortenberry lied to federal agents multiple times about $30,000 in illegal campaign contributions he received from a Nigerian billionaire at a 2016 fundraiser in Los Angeles. Federal law prohibits donations from foreigners.

At his trial, prosecutors played phone recordings between Fortenberry and a donor-turned-informant, who warned the congressman that the donations had likely been funneled to him from Gilbert Chagoury, the Nigerian billionaire of Lebanese descent.

Fortenberry´s attorneys later argued that he didn´t hear the warning due to bad cellphone reception.

In the special election, Flood appears to have a strong edge in the district, which includes Lincoln, parts of suburban Omaha and dozens of smaller, more conservative towns. The district has nearly 68,000 more Republicans than Democrats and hasn’t elected a Democrat to Congress since 1964.

Republicans are also outpacing Democrats in early-ballot turnout for the special election, according to the Nebraska secretary of state’s office. In most elections, early absentee votes tend to favor Democrats.

For voters, a switch from Fortenberry to Flood wouldn’t make much difference in terms of policy. Both have described themselves as strong conservatives who support tax cuts and oppose abortion.

“I think it’s fair to say that their votes would line up probably 90% of the time,” said Sam Fischer, a retired Republican campaign consultant.

Fischer said Flood, like Fortenberry, tends to be a behind-the-scenes player who’s more interested in policy than seeking attention. Flood has played to this perception in campaign ads, describing himself as a “nerd” who will “get things done.”

“His style is not to be a showhorse, but a workhorse,” Fischer said.

Pansing Brooks has said she would also promote the district’s interests in Congress and work across party lines.

“I’ve said one-party rule isn’t working. We have to come together,” she said during a televised debate with Flood.

Flood and Pansing Brooks will face each other again in the November general election to decide who takes the seat for the next congressional term.

Fortenberry’s spiral began after he accepted political donations from Chagoury during a 2016 fundraiser in Los Angeles. Chagoury funneled the money to Fortenberry´s campaign through strawmen. Chagoury’s contributions to Fortenberry and other politicians triggered a federal investigation.

Fortenberry “did not engage in this wrongdoing out of an urgent financial need or because of an aberrant life circumstance,” prosecutors wrote in their sentencing memo. “Rather, he was motivated by plain, selfish desire to cling to his status as a powerful federal official.”

Fortenberry´s trial was the first of a sitting congressman since Rep. Jim Traficant, D-Ohio, was convicted of bribery and other felony charges in 2002.

Fortenberry´s attorney, John Littrell, argued that the conviction has already devastated his client´s life by forcing him to resign from Congress, stripping away his right to vote and own firearms, and putting his federal pension at risk.

“The painful collateral consequences of this conviction have already achieved any deterrence that this prosecution could achieve,” Littrell wrote in a counter brief. “There is no danger to the public. Mr. Fortenberry has led an extraordinary and rigorously law-abiding life over his sixty-one years. He will continue to do good for others.”

Fortenberry’s departure creates an unusual situation in the district, which was redrawn by state lawmakers in September as part of the once-a-decade redistricting process.

The new districts went into effect immediately after lawmakers and Gov. Pete Ricketts approved them, which changed the area and some of the constituents that Fortenberry represented, said Cindi Allen, a spokeswoman for Nebraska Secretary of State John Gale.

Flood and Pansing Brooks are running in the new district, with some new constituents that weren’t eligible to vote for Fortenberry during his last election in 2020.