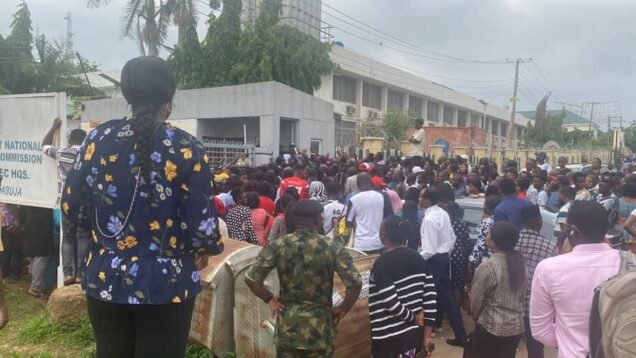 Many residents of Abuja have alleged that the Independent National Electoral Commission (INEC) is making it difficult for them to be registered for the Continuous Voters Card (CVR).

They told the News Agency of Nigeria (NAN) on Tuesday in Abuja that they left their homes as early as 4 a.m. to be registered only for “INEC to announce they were not working today’’.

The residents were seen hitting the INEC office gate shouting “we want our PVCs’’, while some of them lay on the road threatening not to leave the road until they get their PVCs, thereby, obstructing the movement of cars.

Many of the residents said they had registered and wanted to collect their PVCs, while many others want to do fresh registration.

Mr. Emmanuel Ogbon, a youth said that he got to the INEC office at about 5 a.m. and was given a book to write his name.

“We wrote our names and they asked us to join the queue which we did, they later said that their machines were not on ground, that they would have to go and get them.

“We have been here and they have not been addressing us, what we need is our PVCs because we want to vote this time.

“They said that youths are lazy, but this time we don’t want to be lazy, we want to vote. Until they give us our PVCs, we are not going to leave here,’’ he said

Another resident, Mr. Emmanuel Ibrahim alleged that INEC was intentionally making it difficult for them to be registered to get their PVCs.

“They are intentionally frustrating us, they have the machines, we saw them, the crowd was there, and the machines were there.

“Now see the crowd since morning, yet nobody is attending to them.

“Even if they say that they are not extending the deadline, today is not June 30, we still have many days to go, at least allow that 30th to come then you can tell us otherwise.

“See the crowd yet no single person has been attended to and then you want credible elections.

A businesswoman, Ms. Juliet Uche said that they closed their shops to come and register and get their PVCs, adding that they would no longer sell their votes for items and other things, they must vote and secure their future.

“If I had opened my shop today, I will get one naira or two naira, to be honest with you, it is not easy. Imagine one cup of groundnut being sold for N200.

“The prices of foodstuff and other items have increased and the salary is too poor, how much are workers being paid, so it is important for youths to vote.’’

Another resident, Mr Chukwu Godswill said that he came to make corrections on his PVC but he was not allowed access into INEC office.

“We have had very bad experiences here, since Saturday, people have been coming for this and nothing has been done.

“We got here this morning and they said that their machines are not working, my question is must we suffer like this.

“We are budgeting a lot of money for the commission to get this done, must we go through all these before we can vote? This is our right,’’ Godswill said.

Mr Olawale Rufia, another resident said that the PVC process was taking too much time and the INEC staff had been telling them to go and come every day.

“It has been come back today, come back tomorrow, at the end of this month, the CVR process will come to an end.

“We all know what today’s date is, so in another two days, it means we cannot collect the PVC again and they are telling us to come back on Wednesday.

“How long is this process going to take? That’s one.

“Secondly, if we are not given this PVC today or by Wednesday as promised, it won’t be good, now the most painful thing is that they are inside and not responding to anyone.’’

However, the INEC Resident Electoral Commissioner, Yahaya Bello, explained that people who had no business with the CVR process stormed the office to cause a commotion, so the commission had to stop the process for the time being.

“People came that they wanted their PVCs, you cannot get your PVC in a rowdy situation, a hundred people cannot go and stand in a room that cannot contain 10 people.

“You have to stay on the line that is how it is done. Somebody who has never come to INEC before will just walk into the office that he wants to collect his PVC.

“What is that? he has to go through CVR, we have to know why he is here, whether he wants to transfer, or he has lost his PVC whether he has never voted before, and so on.

“You can’t just come and start shouting that you want PVC, it is not done like that.

“We attend to more than 750 people in a day and up to 200 people are banging on our door that they want PVC, but they are not ready for PVC. I don’t know what they are looking for.

“Certainly, these people are not here for PVC, they are here to cause commotion unnecessarily in order to steal from people,’’ Bello said.