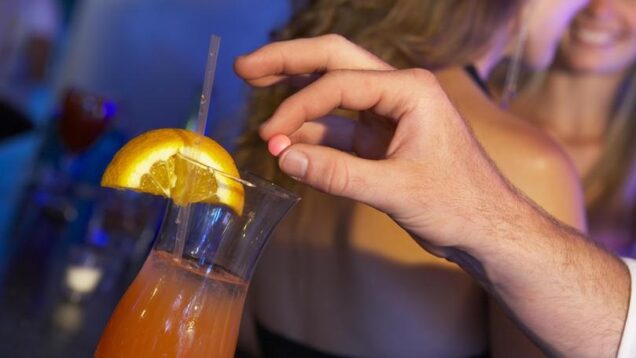 FOR ILLUSTRATION PURPOSE: A man spiking a woman'sv drink in a bar.

A Chief Magistrates’ Court in Surulere, Lagos, on Tuesday ordered that a man, Micheal Igwe, who pleaded guilty to spiking his female friends’ drinks be remanded in a correctional centre.

NAN reports that while in the dock, Igwe, insisted that he spiked the women’s drinks because he thought they were all having fun.

The Magistrate, Mrs Sadiq Bello, ordered that Igwe be remanded to the Nigerian Correctional Service facility in Ikoyi Prisons until June 30 for facts and sentencing.

Earlier, the Prosecution Counsel, Insp Courage Ekhueorohan told the court that the defendant committed the offence on May 7 at Excellent Hotel, located at No. 1 Oyabiyi St., Off Opopo, Surulere Lagos,

Ekhueorohan said that Igwe mixed ‘Rohypnol, Tramadol’, stout and action bitters in his female friends’ drinks without their consent.

He added that the women who were rendered unconscious after taking the drink were immediately rushed to the hospital.

The offence, Ekhueorohan said, contravened the provisions of Section 243 of the Criminal Law of Lagos State, 2015.