Splendid moment of Wike, Ikpeazu in Turkey for vacation (Photos) 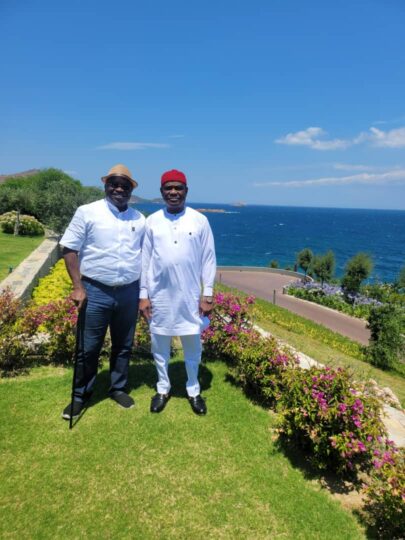 Wike and Ikpeazu in Turkey

Wike took to his Twitter handle on Tuesday to announce that he is currently in Turkey with Ikpeazu on a needed vacation.

He wrote: “Finally enjoying a much needed vacation in Turkey with my brother @GovernorIkpeazu.”

In recent time, the Rivers governor has been at the centre of the storm in the Peoples Democratic Party (PDP) after he lost the party’s presidential ticket to former Vice President, Atiku Abubakar.

He also lost the bid to be Atiku’s running mate for the 2023 presidential election to his counterpart in Delta State, Dr. Ifeanyi Okowa.

There have been speculations that Wike might dump the PDP as he is not happy with what has been going on.

He had openly lashed out at his counterpart in the South for betraying him after he lost the presidential ticket.

Various emissaries had been sent to placate Wike, but all seemed to have fallen on a fallow ground.

Other presidential candidates have begun to woo him to their side.

Presidential candidate of the New Nigerian Peoples Party (NNPP), Rabiu Kwankwaso and the Labour Party’s candidate, Dr. Peter Obi had all visited him in Port Harcourt in what many people considered an attempt to woo him to dump PDP for their parties.

But Wike had said he would never leave the PDP whatever happened.