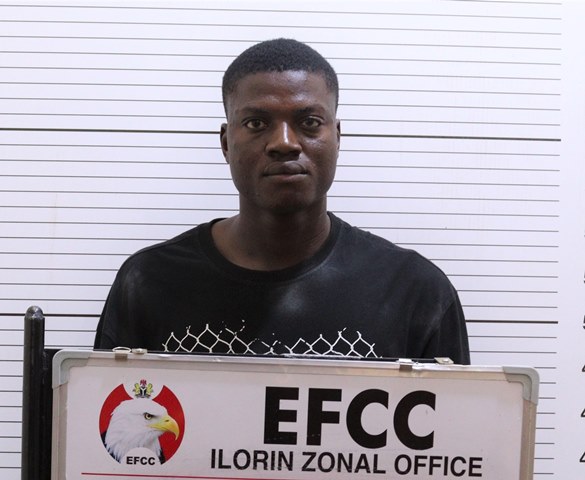 The Ilorin Zonal Command of the Economic and Financial Crimes Commission, EFCC, has secured the conviction of Olukayode Emmanuel Olamilekan from Akure, Ondo State for offences bordering on cybercrime.

Olukayode, 26, was convicted and sentenced to two years imprisonment by Justice Muhammed Sani of the Federal High Court, Ilorin after he was found guilty of the two-count charges levelled against him by the EFCC.

The convict was among the thirty suspected internet fraudsters arrested in Ado-Ekiti on April 26, 2022 during a sting operation.

Investigation into the matter revealed that Olukayode, who is currently jobless is into internet fraud and had benefited several millions of naira from his fraudulent activities, part of which he used to purchase a Mercedes Benz ML 350 for N13 million.

The defendant pleaded guilty to the charge.

Following his guilty plea, counsel to the EFCC, Sesan Ola, reviewed the facts of the case.

He tendered the extra-judicial statements of the defendant, phones, HP laptop and the car recovered from him at the point of arrest as well as fraudulent messages printed from his devices, which were admitted in evidence.

Ola urged the court to convict the defendant in line with his plea and the exhibits tendered before it.

Justice Sani in his judgement said he found merit in the case of the prosecution and consequently convicted the defendant.

The judge sentenced Olukayode to one-year imprisonment on counts one and two with option of N300,000 (Three Hundred Thousand Naira Only) fine on each count.

The court also ordered the forfeiture of one iPhone 12, infinix x 65, HP laptop and Mercedes Benz ML 350 recovered from the convict, to the Federal Government.