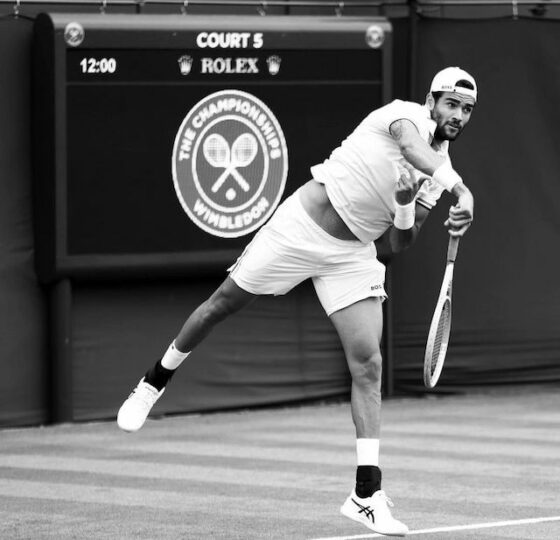 “I am heartbroken to announce that I need to withdraw from Wimbledon due to a positive COVID-19 test result”, he said in a post on Facebook.

“I have had flu symptoms and been isolating the last few days. Despite symptoms not being severe, I decided it was important to take another test this morning to protect the health and safety of my fellow competitors and everyone else involved in the tournament.

“I have no words to describe the extreme disappointed(sic) I feel. The dream is over for this year, but I will be back stronger”, Berrettini wrote.

An already depleted men’s draw only got poorer when Canadian sixth seed Felix Auger-Aliassime was knocked out in the first round by Maxime Cressy, who fought back from a set down to prevail 6-7(5) 6-4 7-6(9) 7-6(5) in over four hours.

Rafa Nadal’s participation had been in doubt earlier this month due to a foot injury but, barring a third set wobble, he came through his first match on grass in three years to beat Argentine Francisco Cerundolo 6-4 6-3 3-6 6-4.

Nick Kyrgios provided fireworks in a five-set win over Briton Paul Jubb in a match marred by arguments with a line judge, the chair umpire and a heckler, with the Australian admitting he spat in the direction of the fan booing him.

World number one Iga Swiatek won her 36th consecutive match to record the longest winning streak in the women’s game in the 21st century when she beat Croatia’s Jana Fett 6-0 6-3.

Former number one Simona Halep, making her first appearance at the All England Club since lifting the title in 2019, beat Karolina Muchova 6-3 6-2 while Coco Gauff overcame a first set hiccup to beat Elena-Gabriela Ruse 2-6 6-3 7-5.

Petra Kvitova, another former Wimbledon champion, was also made to work in her first round clash where she beat Jasmine Paolini 2-6 6-4 6-2.

Serena Williams’ first singles match in a year ended in a first-round defeat at Wimbledon on Tuesday.

But she still managed to bring the Centre Court crowd to its feet as they saluted a champion’s performance in a match that lasted over three hours.

Williams lost 7-5 1-6 7-6(10-7) to Harmony Tan but not before the 40-year-old American enthralled the crowd and even saved a match point before she fell in the tiebreak.

There was yet another upset on Tuesday as Chinese Qinwen Zheng reached the second round of Wimbledon by defeating American Sloane Stephens 7-6 (1), 7-5 in the fading light on Court 15.

The Chinese teenager was making her Wimbledon debut against the 2013 quarter-finalist and former world No 3.