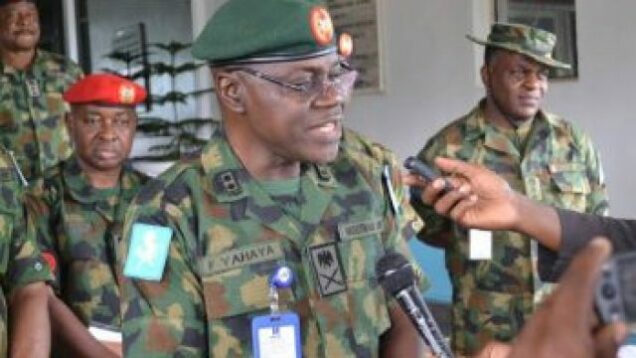 The Nigerian Army will continue to engage the services of its retired personnel in tackling insecurity in the country, the Chief of Army Staff (COAS), Lt.-Gen. Faruk Yahaya has said.

Yahaya said at this on Tuesday night at a ”Regimented Dinner ” he organised for the 2021 set of retired officers from its 3 Division, Rukuba, near Jos.

The COAS, who was represented by Maj.-Gen. Ibrahim Ali, the General Officer Commanding (GOC) the division and Commander Operation Safe Haven (OPSH), thanked the retired personnel for their sacrifices and commitment to duty while in service.

He explained that the expertise of the retired personnel would be needed toward supporting the Nigerian army in its bid to end all forms of insecurity in the nation.

”I wish to assure you that the Nigerian army is grateful for the services you rendered to our father land.

”There are ongoing efforts to engage the services of the retired professionals with the wealth of experiences gathered over the years.

”These experiences are necessary toward tackling all forms of insecurity in our nation, ”he said.

Yahaya added that the dinner was organised to appreciate the retired personnel and their spouses for their meritorious service to the nation.

The COAS assured the personnel still serving, to put in their best in securing the territorial integrity of the nation and promised to make their welfare top of his priorities.

Also speaking, retired Maj.-Gen. Hasaan Umaru, who was Special Guest at the event, thanked the COAS for introducing the dinner as a welfare package for the retired officers.

He tasked the retired officers to be good ambassadors of the Nigerian army and be ready to support it anytime their services would be needed.

Umaru advised them to contribute to the growth of their immediate communities and the society in general.

The News Agency of Nigeria (NAN) reports that earlier, a buffet was held in honour of retired soldiers at the cantonment.