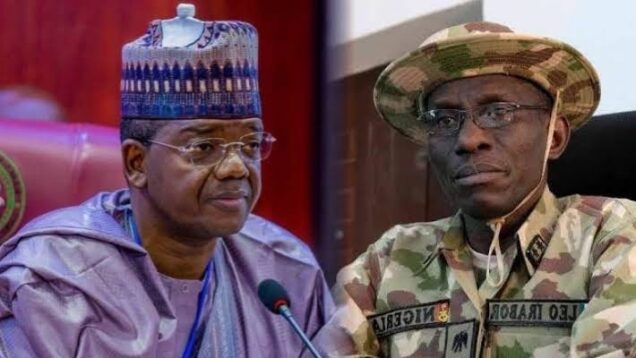 Governor Bello Matawalle of Zamfara State has insisted that citizens of his state must carry guns to protect themselves, despite the opposition of Chief of Defence  Staff, General Lucky Irabor and the Police High Command. To make good his pro-people plan, Matawalle inaugurated four committees.

They are Intelligence Gathering on Banditry,  Community Protection Guards (CPG),   Prosecution of Banditry-Related Offences and State Security Standing Panel. He further donated  20 new Toyota  Hilux vans and 1,500 motorbikes to ease the works of the committees.

As the chief law officer of Zamfara, the Governor, according to a  statement by his Press Secretary, Jamilu Magaji, told anyone who cared to listen that he meant business:  “We will do everything possible to uphold this responsibility within the ambit of the law. The acquisition and usage of firearms by members of the general public who desire to do so would be governed by the Nigeria Firearms Act.”

“We are aware of misgivings expressed in some quarters regarding the new measures, particularly the decision to encourage members of the communities suffering almost daily from the inhumane aggressions of the bandits to acquire firearms to defend their communities,”  the governor said.

True! The misgivings were expressed by General Lucky Irabor on the second day that Matawalle said his people must carry guns. In an interview at the Joint Exercise for the National Defence College and War Colleges of the Armed Forces of Nigeria, code-named ‘Exercise Grand Nationale,’ in Abuja, Irabor said: “I do not think that is the right way to go. I do not think that the governor has the power to instruct the Commissioner of Police to issue licences because the Commissioner of Police does not have the right to issue licences.”

“The basis for asking citizens to bear arms, I am yet to know. I believe that the Attorney General of the Federation will look at the Constitution, what the laws say and what the powers of the governor are to be able to do this.

“There are other legal issues of governance that the governor could have addressed using the instrumentalities of the law available to bring greater peace and security. The armed forces are only an instrument of policy implementation. We do not take instructions from state governments, we have a Commander-in-Chief, and the Constitution gives the right and powers to the Commander-in-Chief. So, we are there to give support to the civil authority, in this case, the police,” he said.

It is not true that Irabor did not know the “basis for asking citizens to bear arms!” Absoluteley false!

Worse still, Zamfara State Commissioner of Police, Ayuba Elkana, reacted: “I cannot issue gun licences to residents of the state. I have not received any directives, and also, there is a ban on firearms licence, and we don’t give licence. I am yet to receive any directive. Let me see the directive first before I can comment. I have not seen the directive, so I cannot comment on compliance. There is nothing like a vote of no confidence, please. This is a farming season, and you cannot get police or any security to be following everybody to the farm. They are attacking people on the farm; that is the problem. It is not as if we are not doing our job; we are doing our best. Of recent, we rescued many people (from bandits).”

The positions of the Police and the Army have put Matawalle and his people on the seesaw of dilemma. Since survival is one of the laws of nature, what the Governor is doing is an instinctive move for self-preservation since the Police and the Army have not been able to help the people. Are they expected to stay supine while they allow bandits, like the Mongol hordes, to mow them down in thousands? No.

It is analogous to when a lion wants to kill a man in a government forest reserve where hunting or poaching is outlawed. He must choose between obeying the law of not killing the big cat or ending in its belly. The law of nature will make him instinctively choose the former.

That was the experience of one man called Moses who lived in Loita Hills in southwestern Kenya. It was narrated in a travelogue, Africa, by Lance Morrow, published in Time magazine on Monday 23 February 1987.

Morrow put it this way: “Handsome, thoughtful, impassive, answering questions like a visiting lecturer, Moses conjured up wild animals. His gaze was sleepy and distant. Moses in his tutorial passed on now to the subject of lions. He told about how he had killed a lion in the Loita Hills not many days before. He and another Masai were herding cattle in the upland pastures. A lion sprang at his friend and clawed him on the shoulder. Moses came running and drew the lion away from the other man. The lion charged Moses, and when the animal was six feet distant, Moses hurled his spear. The spear went into the lion’s left eye and crashed through its brain. The animal came to rest at Moses’ feet. It was the sixth lion that Moses had killed in his 29 years.

“There was trouble with the authorities after that. The rangers came and told Moses he could not kill a lion because it is against the law in Kenya to kill one. “I told them, ‘The lion attacked my friend!’ They said, ‘You should have reported the attack first and asked for a permit to kill the lion.’ ” In the Lord Delamere Restaurant, Moses threw back his head and laughed, and cried, with an oddly Yiddish intonation, ‘Ai-yi-yi-yi-yi!’”

Ondo and Oyo to Strengthen Amotekun

Like Moses of Kenya and Zamfara, the matter is between law and life. The Nigerian governors have decided to choose life. Governor of Oyo State, Seyi Makinde, has approved the recruitment of additional 500 corps into the State Western Nigeria Security Network codenamed Amotekun. This is contained in a statement issued by the State Commissioner for Information, Culture and Tourism, Wasiu Olatunbosun, on Sunday in Ibadan.

Also, the Ondo House of Assembly said it would soon amend the law that established the State Security Network Agency, (Amotekun), “to deal with the rising insecurity in the state.” This was revealed by Gbenga Omole, the assembly’s spokesperson, and member of the House Committee on Security, during the Oka Security Summit organised by the Oka community in Akoko South-West Local Government Area recently.

In his words: “We (the Assembly), have been doing our best; of recent, we have to tinker with the Amotekun law. We are looking at the law to give more backings to Amotekun in terms of procurement of more sophisticated weapons and more technology to be deployed. So we are supporting the government (executive) in terms of security that law is under the process of being amended now to give more power to Amotekun.”