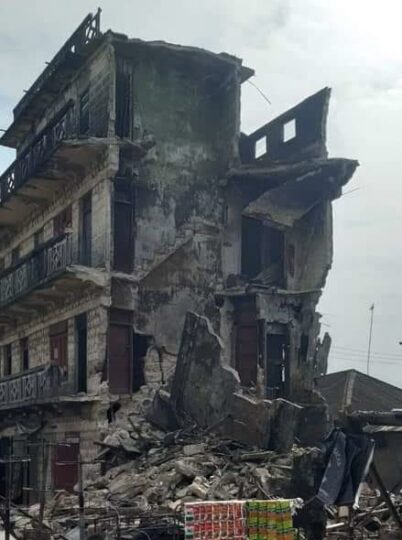 An old post-colonial three-storey building collapsed at about 2am on Wednesday, in the old Port Harcourt Township in Rivers State.

Our Correspondent reports that the partially collapsed building, located at No. 112 Bende Street, Old Port Harcourt Township, is said to be one of the oldest post-colonial buildings in the area.

The building was said to have shown enough signs of dilapidation and was marked for demolition by the Rivers State Ministry of Urban Planning and Development since 2018, but was not demolished before a part of it carved in today.

At the time of filing this report, officials of the Ministry of Urban Planning and Development were said to have mobilised to the demolished site to see if there were casualties as some families said are said to be living there.

Governor Nyesom Wike had dissolved its cabinet and he is presently on vacation in Turkey.