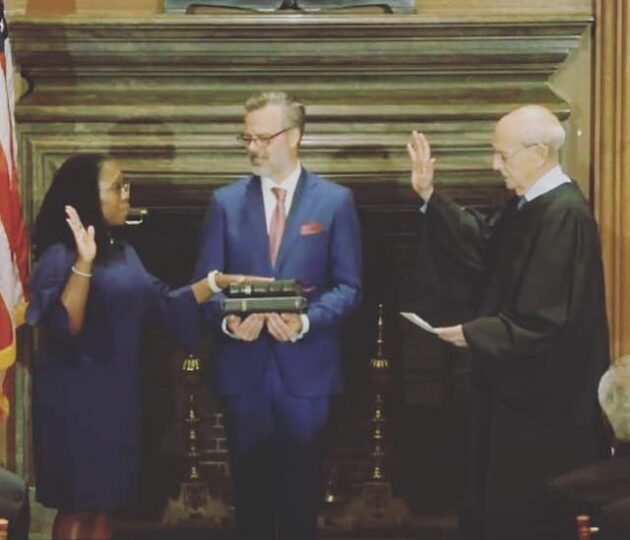 Ketanji Brown Jackson made history Thursday when she was sworn-in as the first Black woman to become a justice of the U.S. Supreme Court.

Jackson, 51, joins the liberal bloc of a court with a 6-3 conservative majority.

Breyer, at 83 the court’s oldest member, officially retired on Thursday.

“With a full heart, I accept the solemn responsibility of supporting and defending the Constitution of the United States and administering justice without fear or favour,” Jackson said in a statement.

Jackson is the 116th justice, sixth woman and third Black person to serve on the Supreme Court since its 1789 founding.

“I am glad for America,” Breyer said in a statement. “Ketanji will interpret the law wisely and fairly, helping that law to work better for the American people, whom it serves.”

Biden appointed Jackson last year to the U.S. Court of Appeals for the District of Columbia Circuit after she spent eight years as a federal district judge.

At the time of the ceremony, Biden was flying back to Washington from a NATO summit in Madrid.

Like the three conservative justices appointed by the Democratic president’s Republican predecessor Donald Trump, Jackson is young enough to serve for decades in the lifetime job.

“I am pleased to welcome Justice Jackson to the court and to our common calling,” Chief Justice John Roberts said at the ceremony.

The Senate confirmed Jackson on a 53-47 vote on April 7, with three Republicans joining the Democrats in support of her. Jackson’s appointment does not shift the court’s ideological balance.

“It has taken 232 years and 115 prior appointments for a Black woman to be selected to serve on the Supreme Court of the United States,” Jackson said at an April 8 event celebrating her confirmation. “But we’ve made it.”

A Reuters/Ipsos poll this week found that a majority of Americans – 57% – holds a negative view of the court following the abortion ruling, a significant shift from earlier in the month when a narrow majority held a positive view.